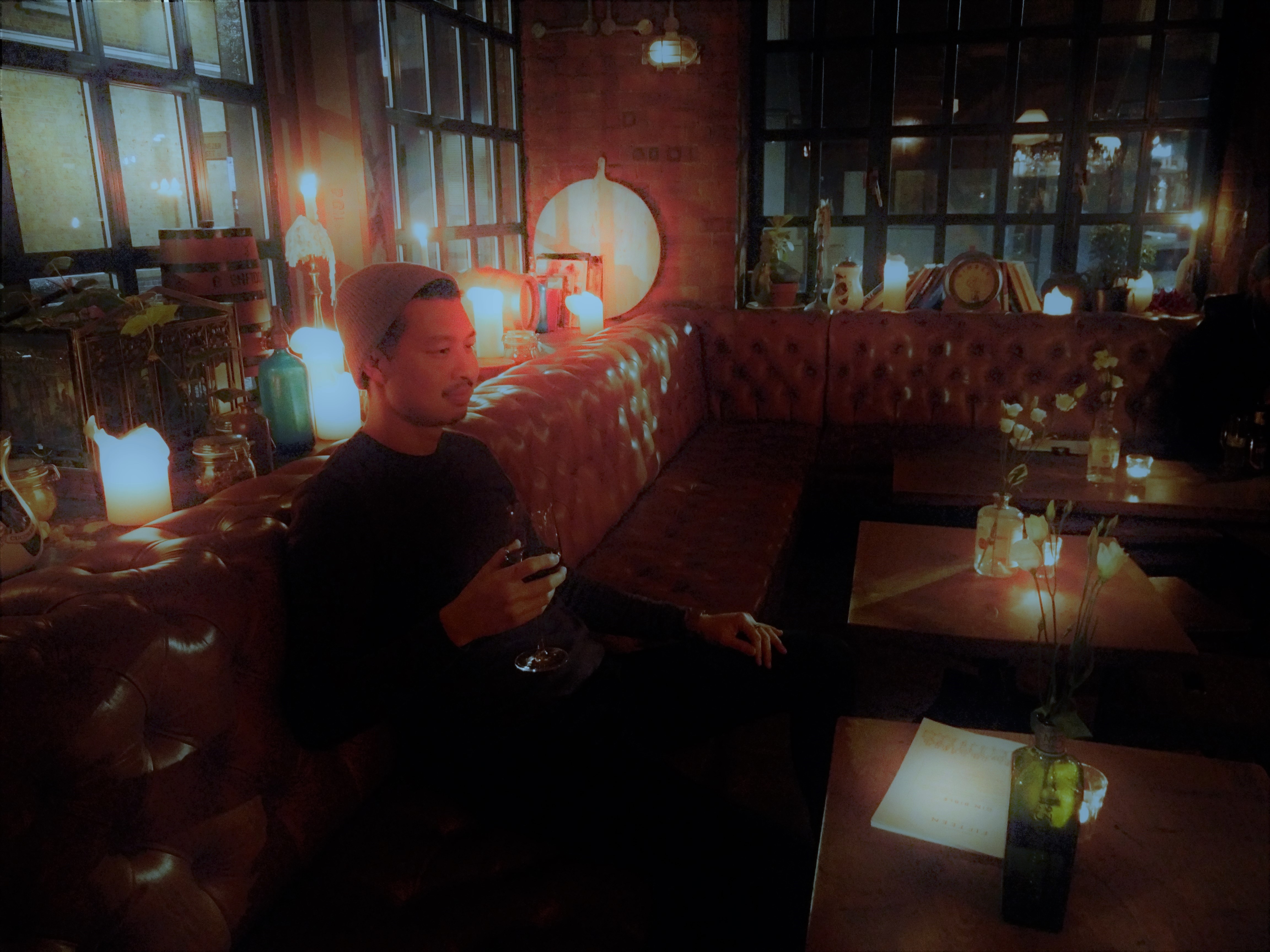 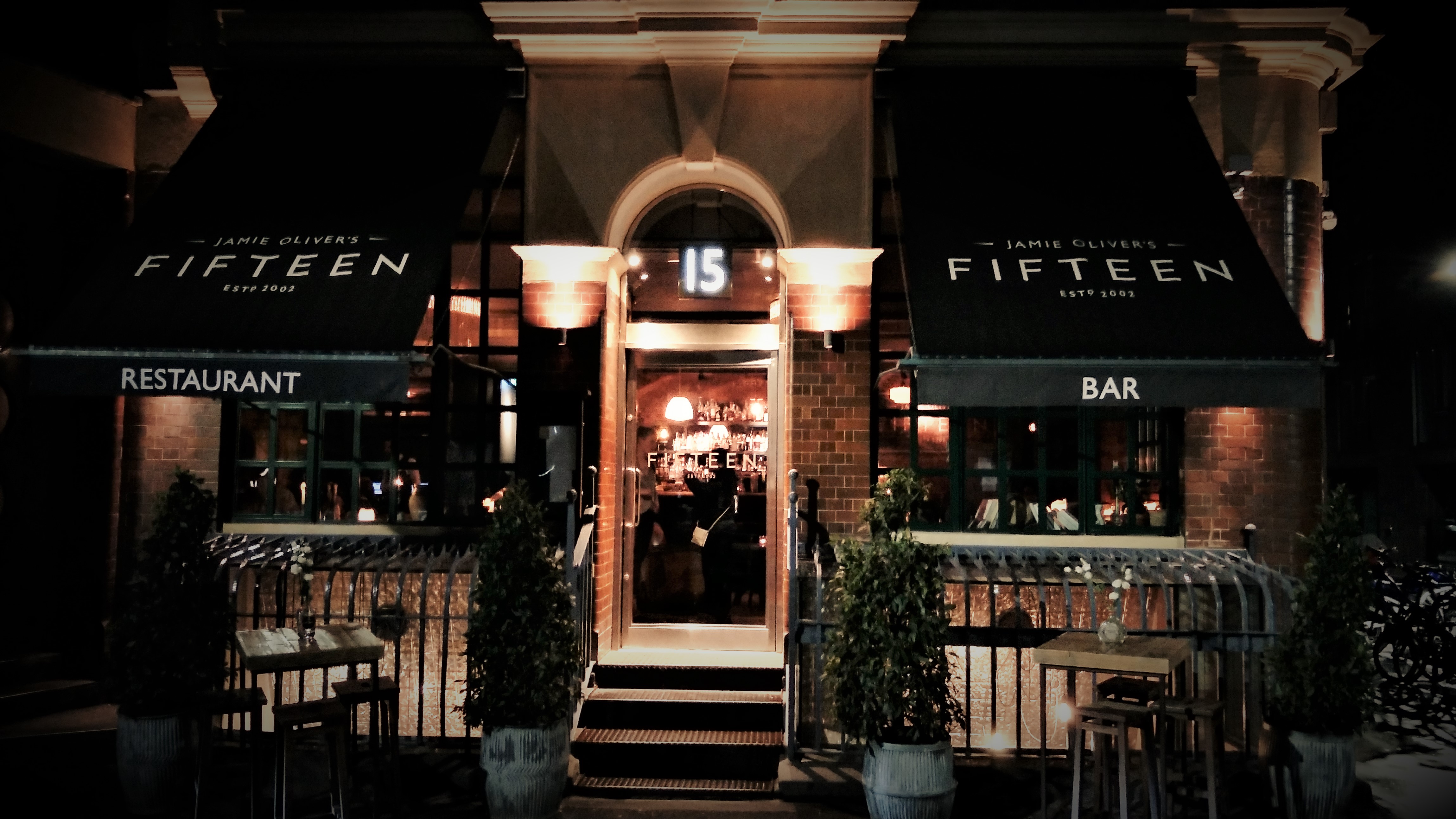 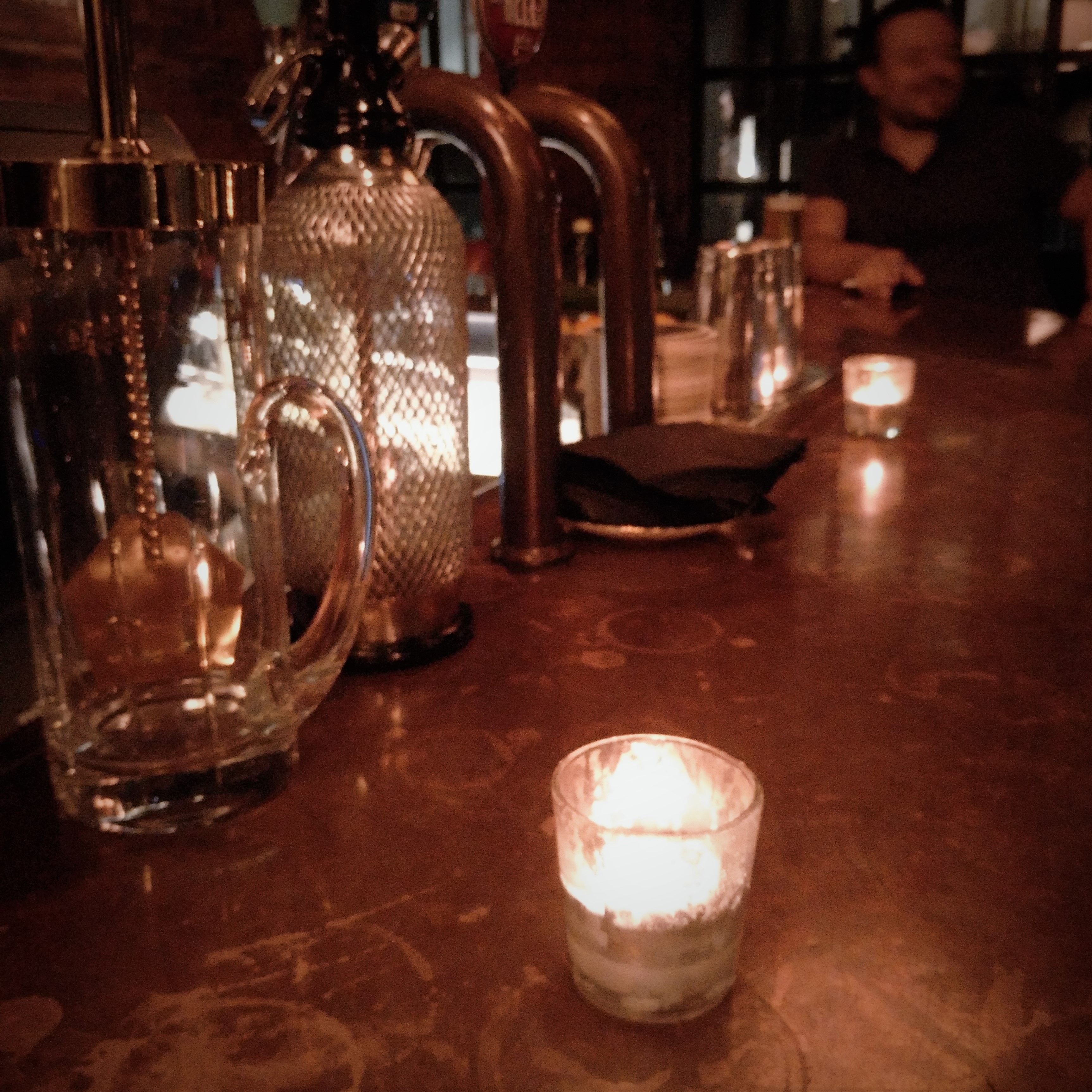 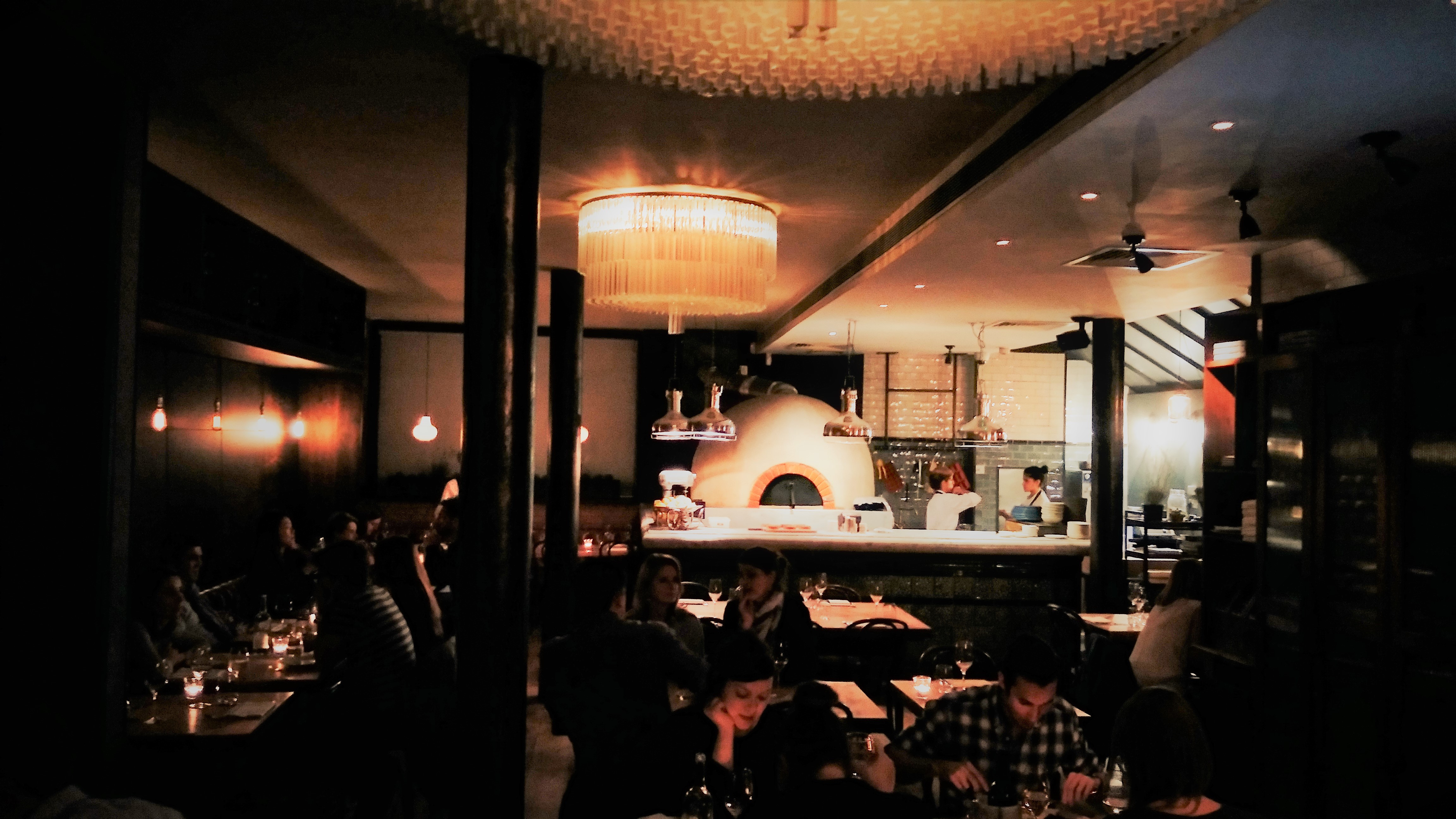 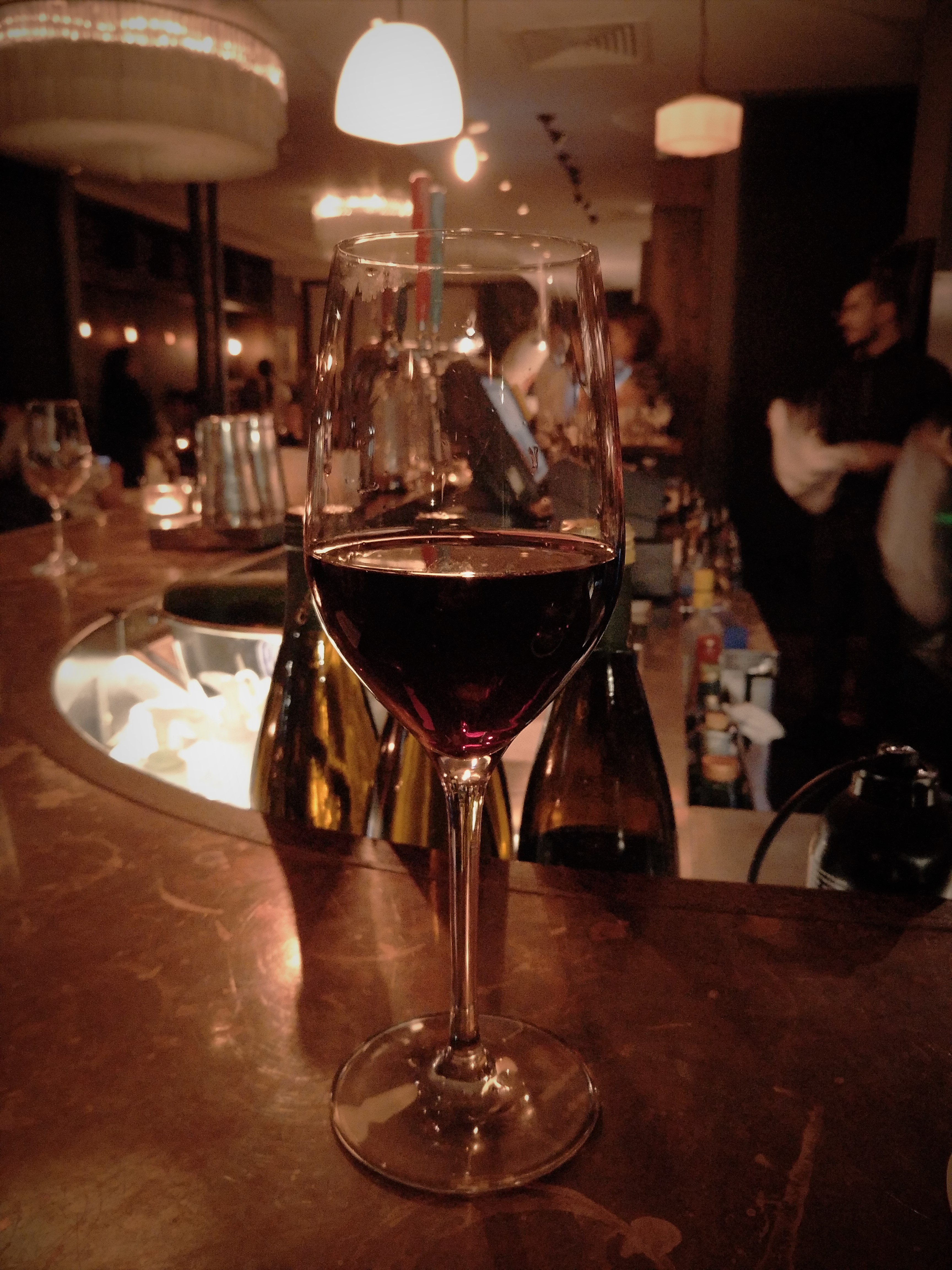 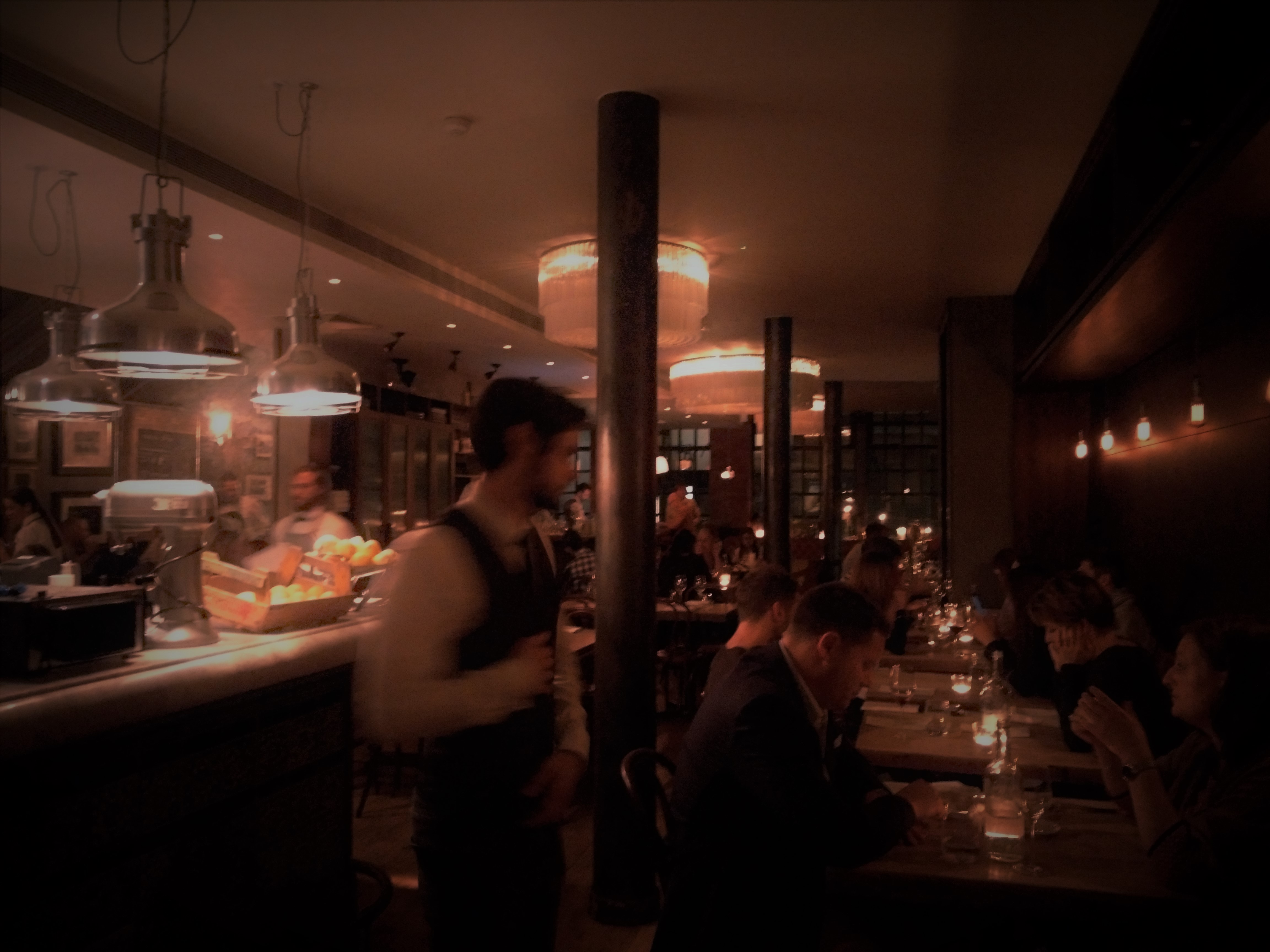 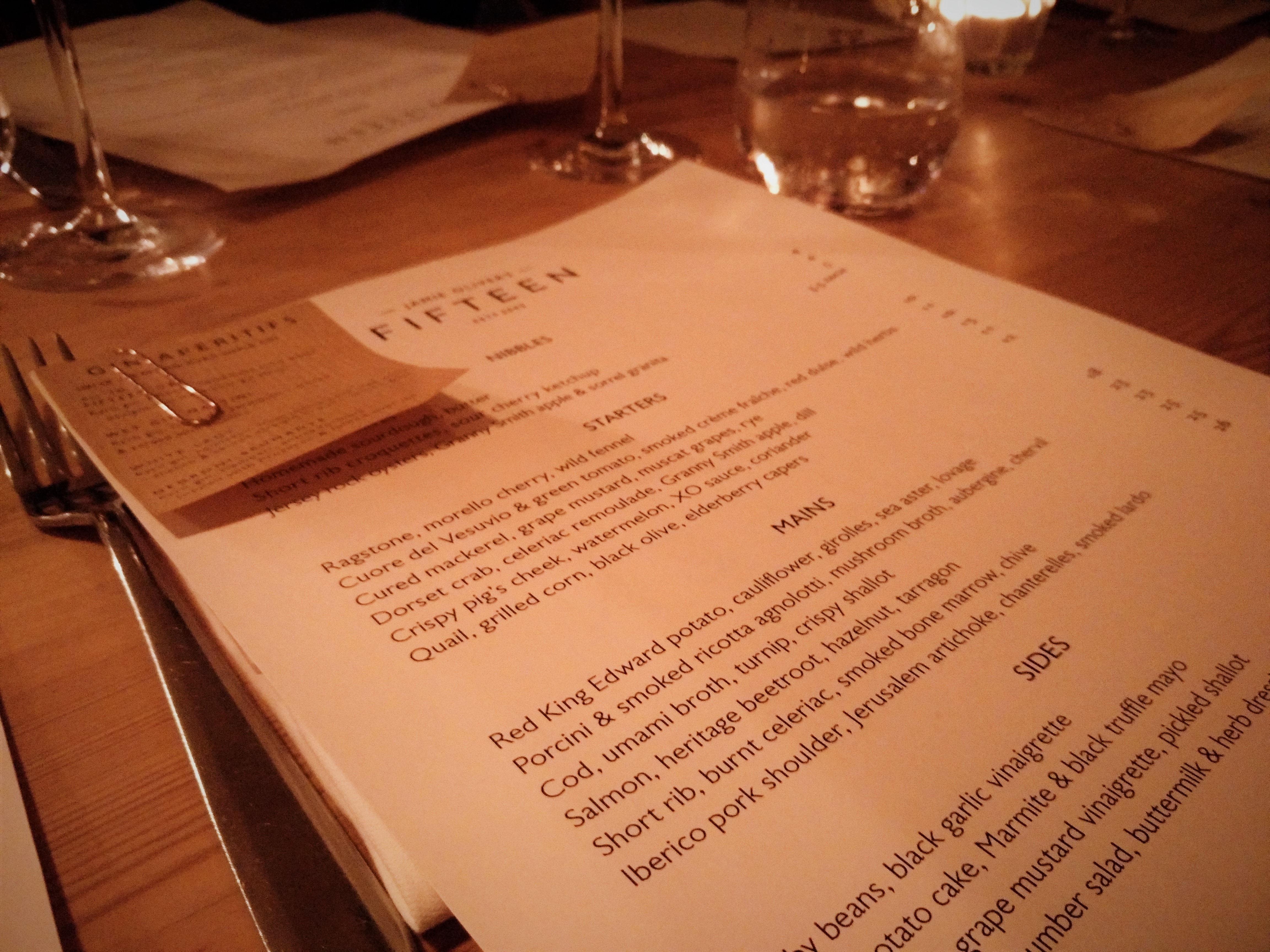 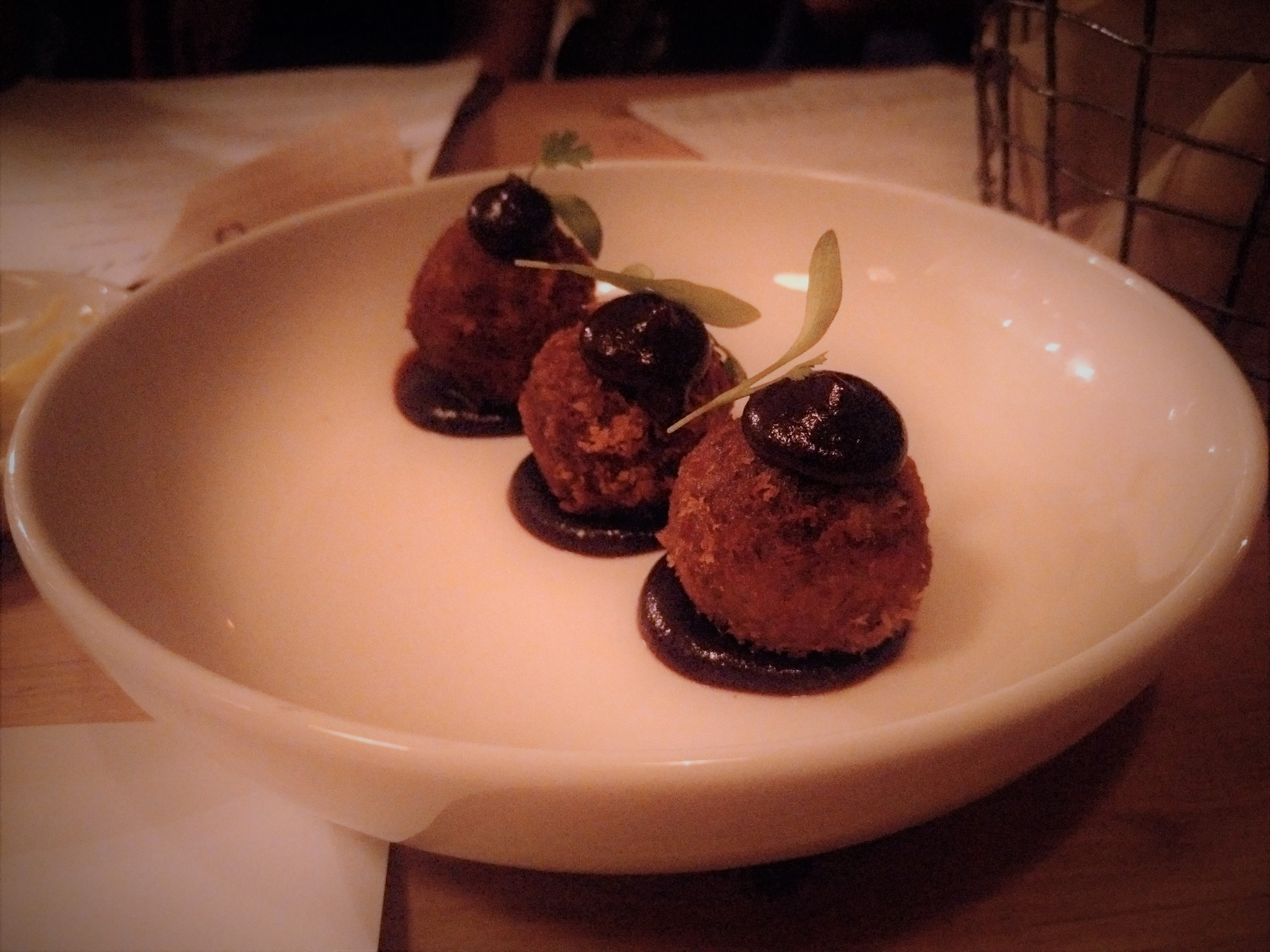 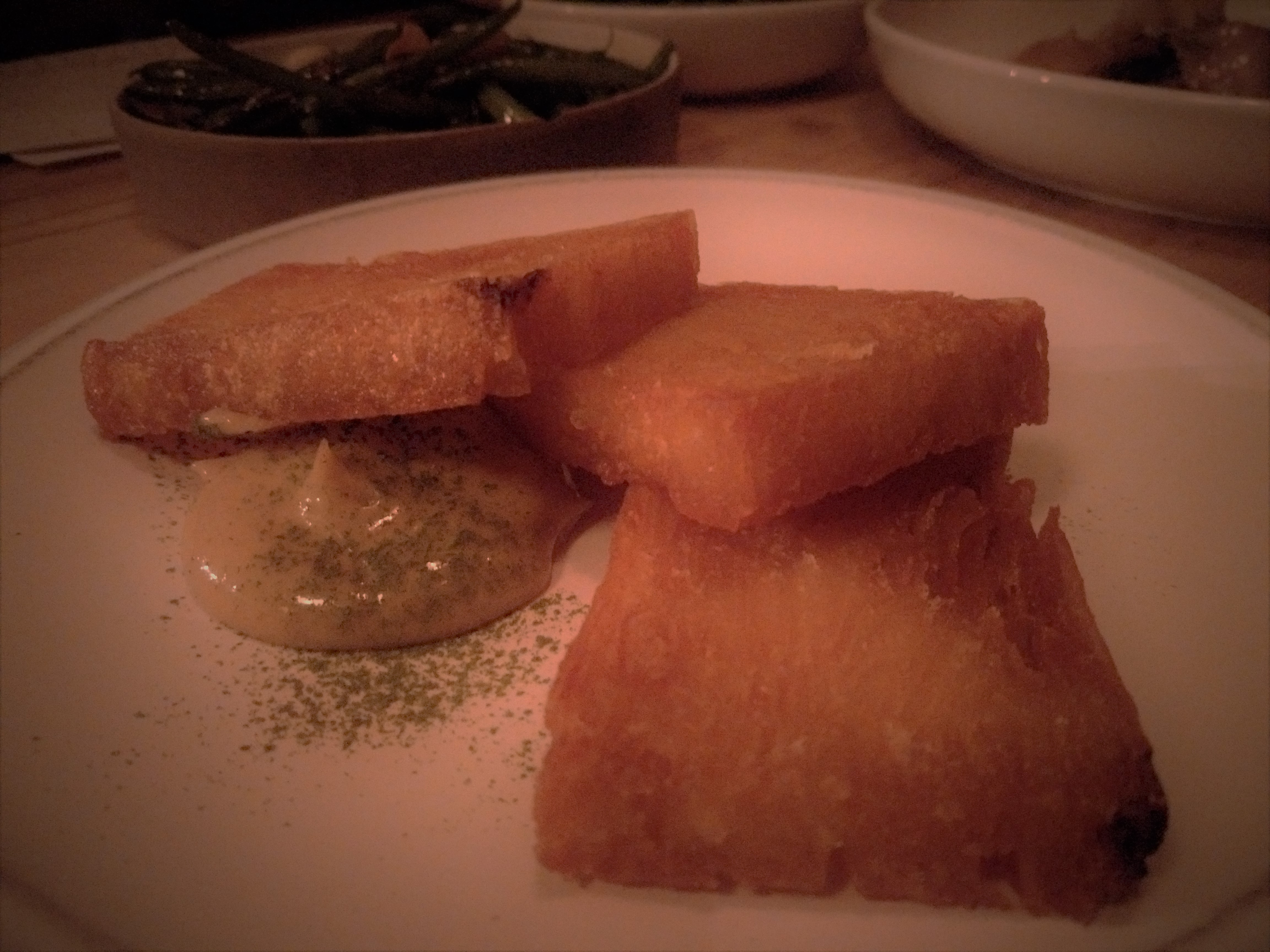 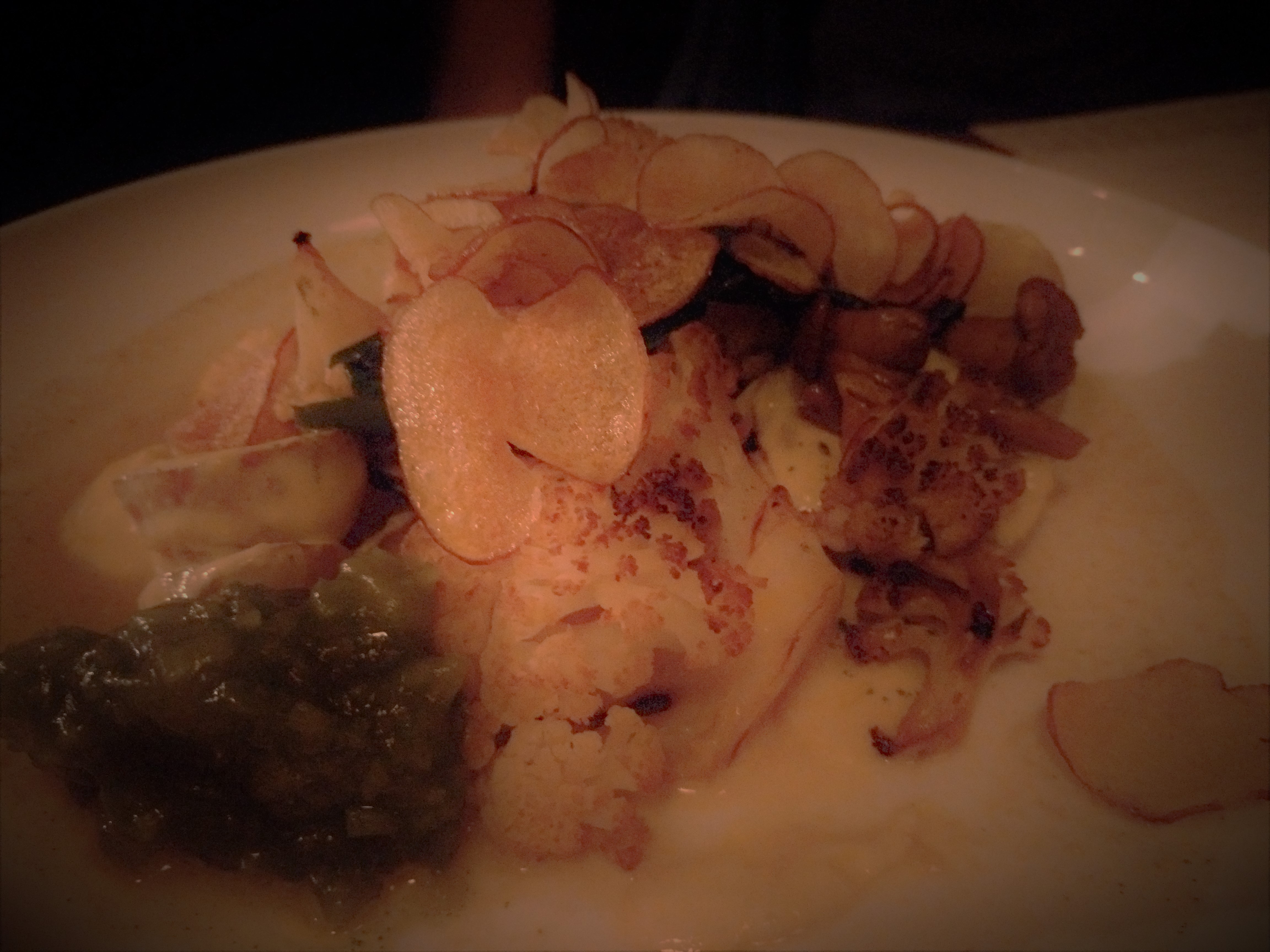 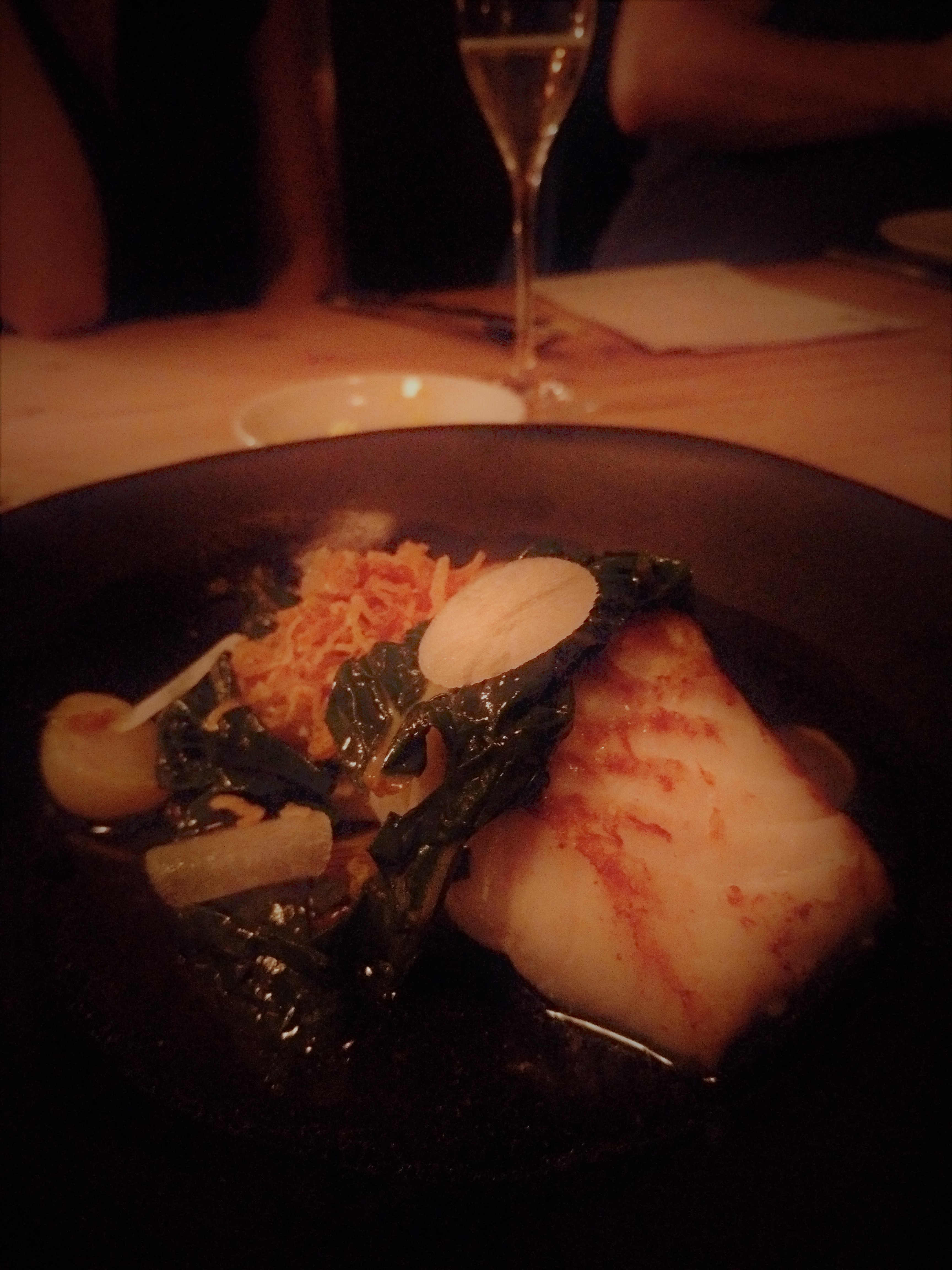 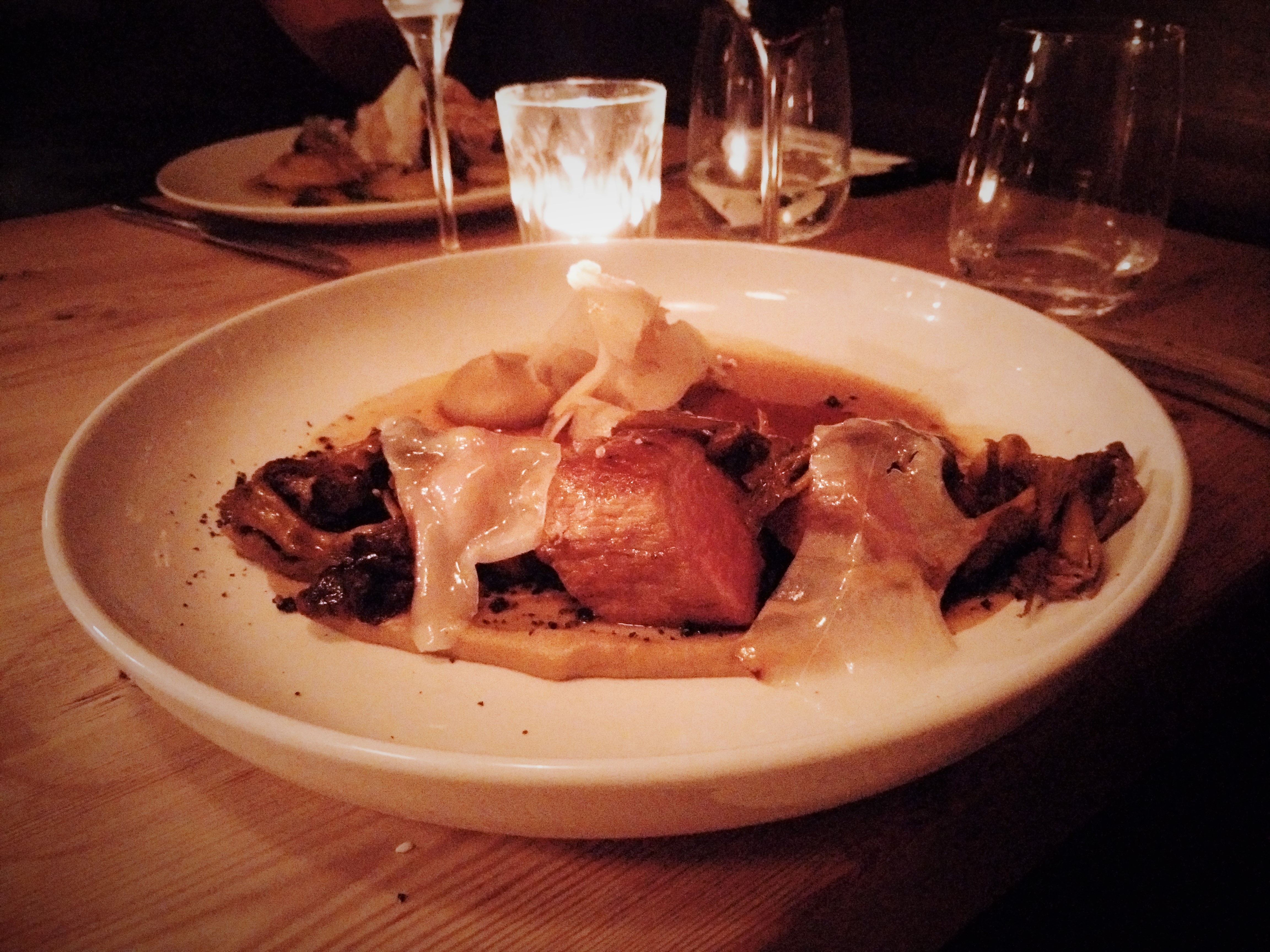 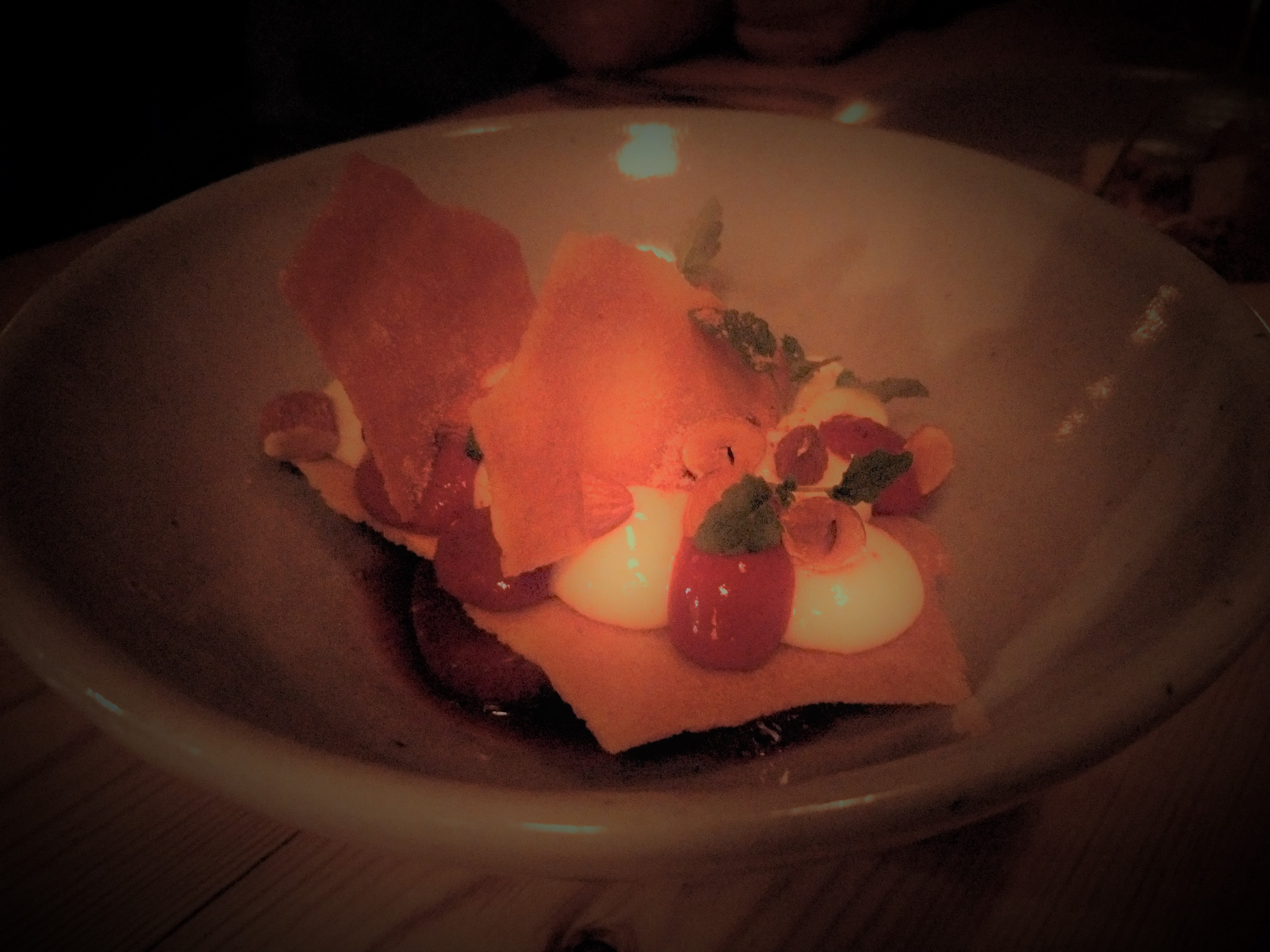 I have only recently visited Jamie Oliver’s Fifteen restaurant in Shoreditch, London, completely unaware that it has already been fifteen years that Jamie Oliver established this place in 2002.

It all began with a Channel 4 documentary called Jamie’s Kitchen, aired in November 2002, that follows Jamie Oliver as he trained a group of fifteen disadvantaged youths. Those who completed the course, would be offered jobs at his new restaurant called Fifteen.

Today, Fifteen has gone on to be a global charity helping disadvantaged youths by inspiring them to believe in themselves and achieving their dreams of becoming chefs. So far, the Fifteen Foundation has trained more than 500 chefs worldwide.

The original location here in Shoreditch, as we were told by the friendly waiter, is where Jamie still does his photo shoots for his cookbooks.

Jamie Oliver’s Fifteen is both a cocktail bar and a restaurant that houses an impressive firewood stove. The interior itself is very cosy, very British and has a unique London feel. I would say the same could be said about the food.

The food at Jamie Oliver’s Fifteen

Jamie Oliver’s Fifteen is a reimagination of British food. Jamie is well-known for his love for Italian cuisine, and he has also deconstructed much of Indian cuisine for the benefit of foodies and homecooks around the world.

Jamie Oliver’s Fifteen sells uniquely British ingredients, combines them with the tastes of food cultures from around the world and presents them in different surprising bursts of delight onto your palette – that’s the spirit of the world-class city of London, on a plate.

What I had at Jamie Oliver’s Fifteen

You have a choice of Chef’s Menu, which is a five-course dinner at 60 pounds per person. To take the chef’s menu, the whole table has to want it together.

We had small eaters with us that night, so we chose for à la carte, which also allowed us to try different dishes.

I went for an Asian-inspired main of Cod in a umami broth. My husband went for Short ribs, served with, burnt celeriac, smoked bone marrow and chives. A friend went for a vegetarian delight of porcini mushrooms, smoked ricotta agnolloti, mushroom broth, aubergine and chervil.

But the highlight of the evening was another friend’s Iberico pork shoulder served with grilled baby gem and lardo. Very high-quality pork shoulders flash-grilled for that crispy burnt taste and texture while retaining the juicy tenderness on the inside.

I strongly recommended the sides:
The summer beans in black garlic vinaigrette were cooked to the right level of crunchiness and combined so well with garlicky, sour and savoury flavours. The watercress salad in grape mustard vinaigrette and pickled shallot was so refreshing! Last but not least, the fried crispy potato cake was not chips but potatoes pressed so many times that when fried it was crispy, light and totally not oily. Served in a yet another surprising combo of marmite and black truffle mayonnaise.

The desserts were likewise delightful. The English strawberry with vanilla cremeux, was beautifully combined with the Isle of Punbeck honey and wild fennel. It was the first time I had buttermilk and honey panna cotta – absolutely gorgeous!

What can I say? While Jamie Oliver’s Fifteen is not cheap, and you can easily spend 70-100 pounds or more per person, the social cause, the great dining experience and the amazing food are totally worth the expenses.

Jamie Oliver’s Fifteen is extremely popular. I suggest you book your table weeks in advance.