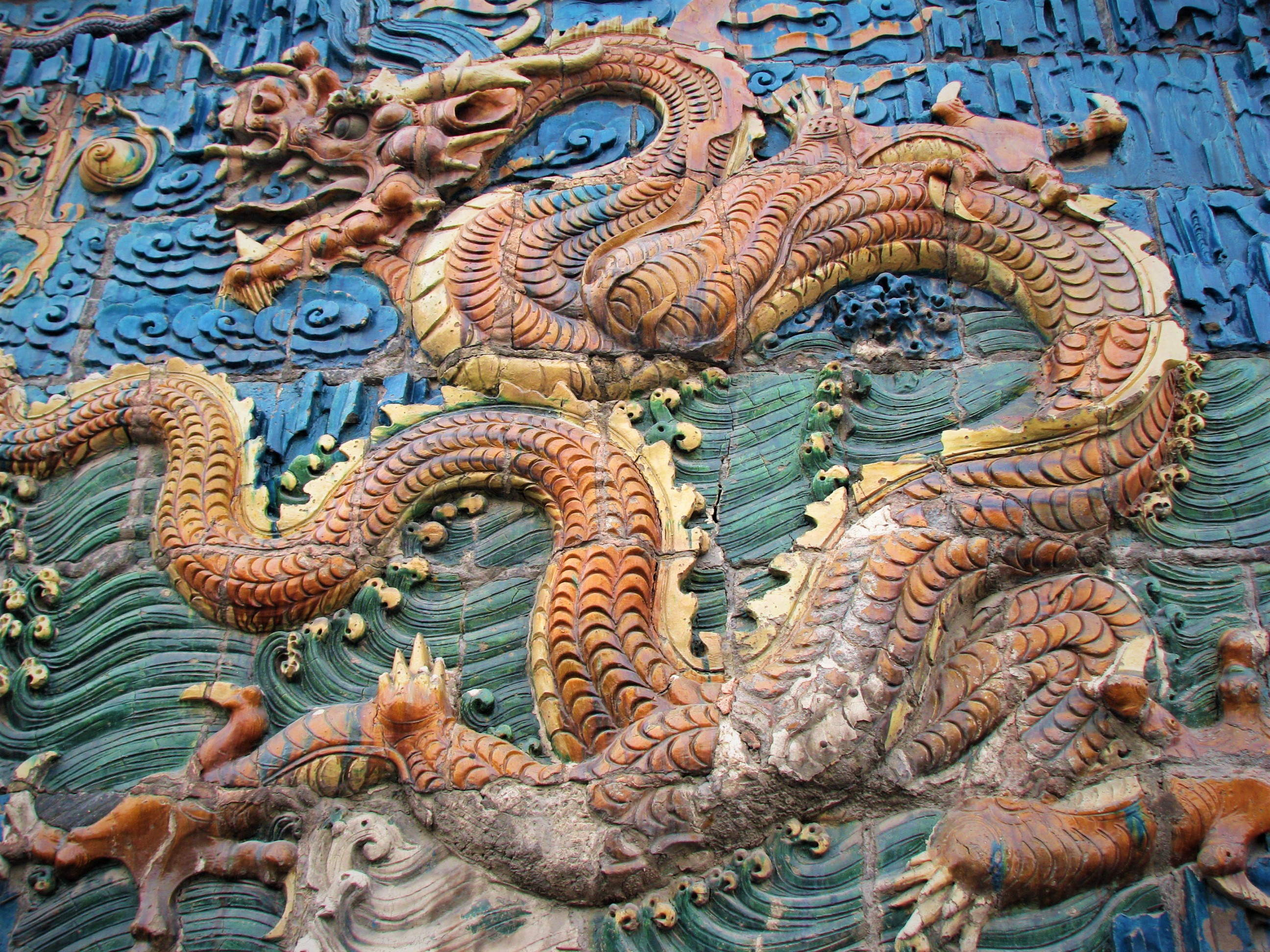 Nine Dragons Walls are a sign of royalty in China. Today, there are around three complete walls left: Forbidden Palace 紫禁城, Beihai Park 北海公园 and this one in Datong 大同.

All three Nine Dragons Walls were constructed during the Ming Dynasty, but the one in Datong is the oldest, dating from 1391 AD.

Why would there be a Nine Dragons Wall be built here?

Datong was the capital of China back in the Northern Wei Dynasty (386 to 534 AD), but the first capital of the Ming Dynasty was in Nanjing 南京, at that time called Jingshi 京师 or Yingtianfu 应天府.

According to records, this Nine Dragons Wall was built for the 13th son of the founder of the Ming Dynasty Zhu Yuanzhang 朱元璋, named Zhu Gui 朱桂. When Emperor Zhu built his capital in Nanjing, he made all his sons Kings of the various states that formed his empire.

Zhu Gui thus became the King of Datong. Yet Zhu Gui was apparently an incredibly bad character: he was often in a state of undress; he was raping his citizens and executed them for fun.

The Emperor was at a loss about what to do with his reckless son, who wanted to accede his father to become the next Emperor.
The Emperor had no intention of allowing Gui to become an Emperor, so he built a “royal palace” for Gui in Datong, hoping this could appease him.

When the palace was built, it included a Nine Dragons Wall that adorns all of the Emperor’s residences.
When it was unveiled, everyone was silenced by the magnificence and beauty of Gui’s Nine Dragons Wall. The glazed tiles and glass insets were so beautiful, it made Gui’s palace outshine all of the royal palaces around Ming China.

Gui had his workmen dig two ponds in front of the wall, so as to reflect the dragons to create an illusion of even more dragons. The water of the ponds came from underground and as centuries passed, many came here to taste the water.

One pond had sweet water, and could quench one’s thirst on a hot day. The other pond had bitter water, and many claimed it could cure all illnesses, including the addiction to opium.

Of course, the ponds are not there anymore today.

What is so special about Datong’s Nine Dragons Wall?

Apart from being the oldest Nine Dragons Wall in China, Datong’s wall is different from those in Beijing (built later once the Ming Dynasty loved the capital from Nanjing):

As Gui was not an Emperor, the middle yellow dragon was not a “sitting dragon”. Also they all have four instead of five claws, signs of a real imperial dragon.

Secondly, Datong’s Nine Dragons Wall is also China’s biggest. According to legend, Gui visited his fourth brother King Yan 燕王 and saw Yan’s Nine Dragons Wall. Filled with jealousy, Gui wanted his father to build him a Nine Dragons Wall that is bigger than his brother’s. So the final measurements given to the craftsmen were “two feet longer, two feet higher and two inches thicker than my brother’s wall”.

Unfortunately, Gui’s royal palace burned to the grounds at the end of the Ming Dynasty but as this wall was not linked to the palace architecture, it has survived intact. This has led some experts to consider this wall not as a feature wall 照壁 but simply a wall to divide the palace from the commoners outside.

Today, Datong’s Nine Dragons Wall is classed as a national treasure and attests to the brillance of early Ming imperial art and architecture.