Explore the most beautiful village in Japan: Shirakawa-go 白川郷 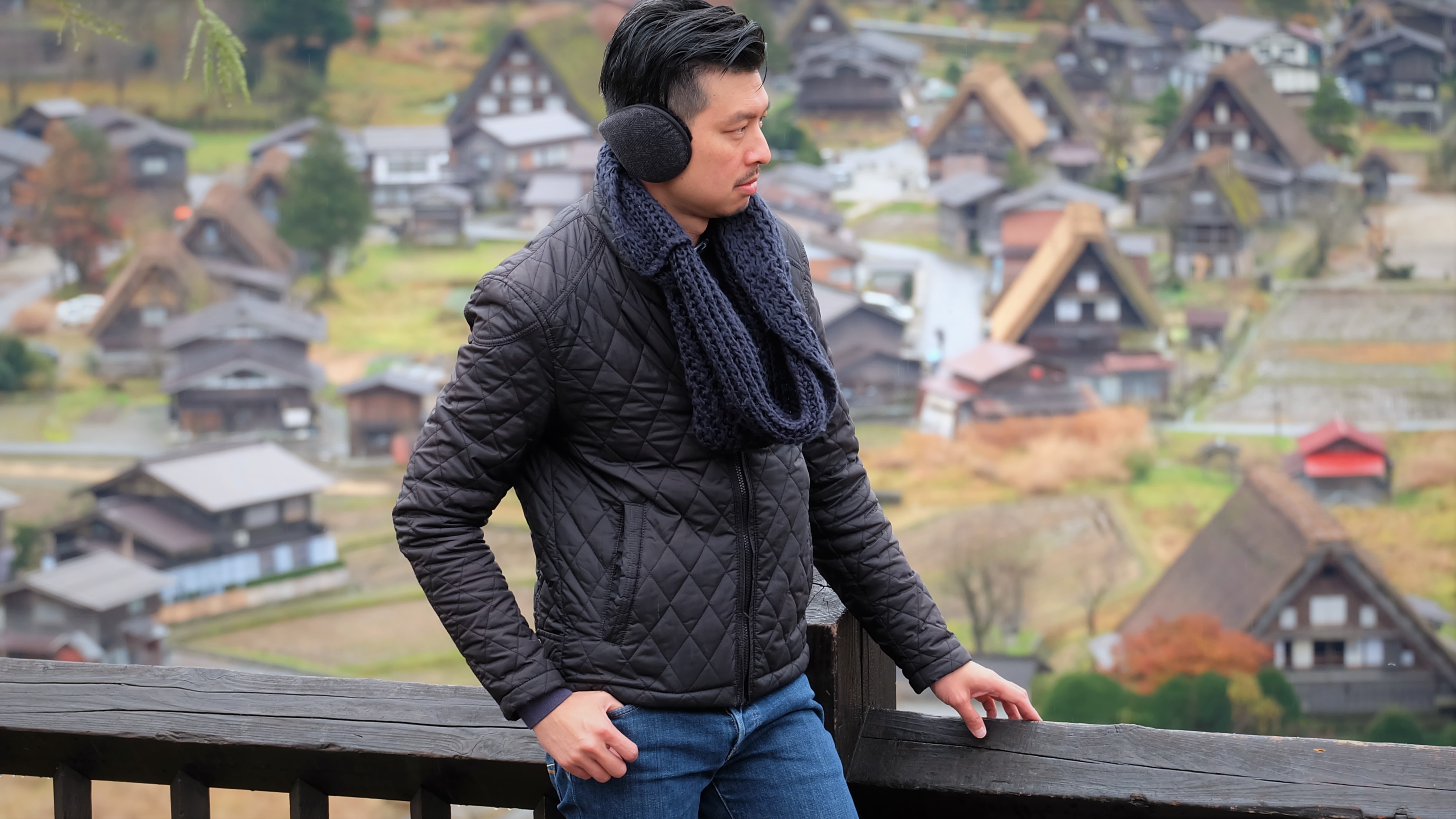 Located in the Chubu Sangaku National Park 中部山岳国立公園 (commonly known to culturally-insensitive English-speakers as the ‘Japanese Alps’), Shirakawa-go 白川郷 was declared a UNESCO world heritage site in 1995 together with a nearby similar village Gokayama 五箇山.

Because it is one of the snowiest places in Japan, houses in these parts were built since the Middle Ages with thick thatched roofs known as gasshō-zukuri (合掌造り) – the word refers to the act of putting two hands together forming the triangular shape of the house. 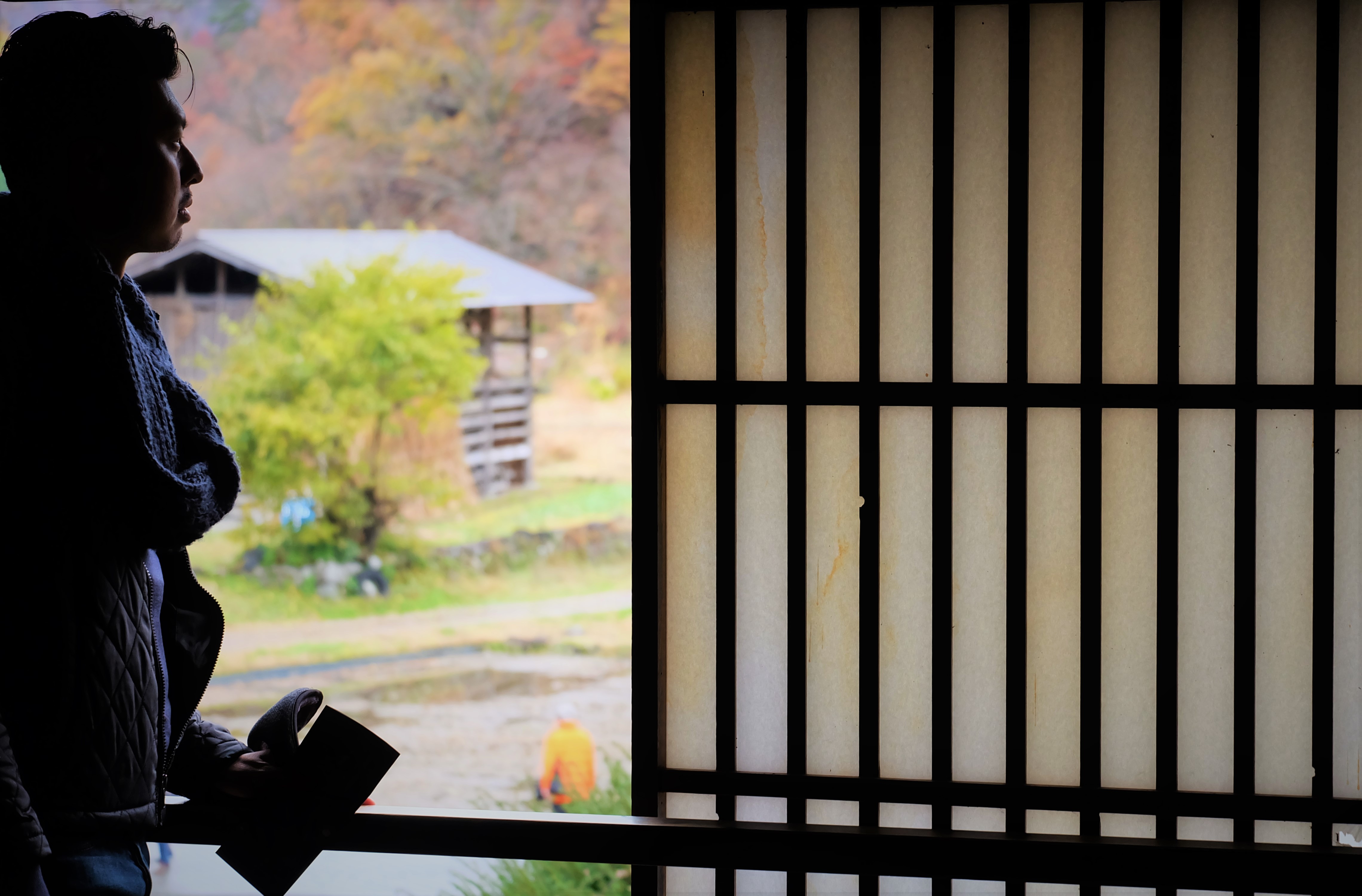 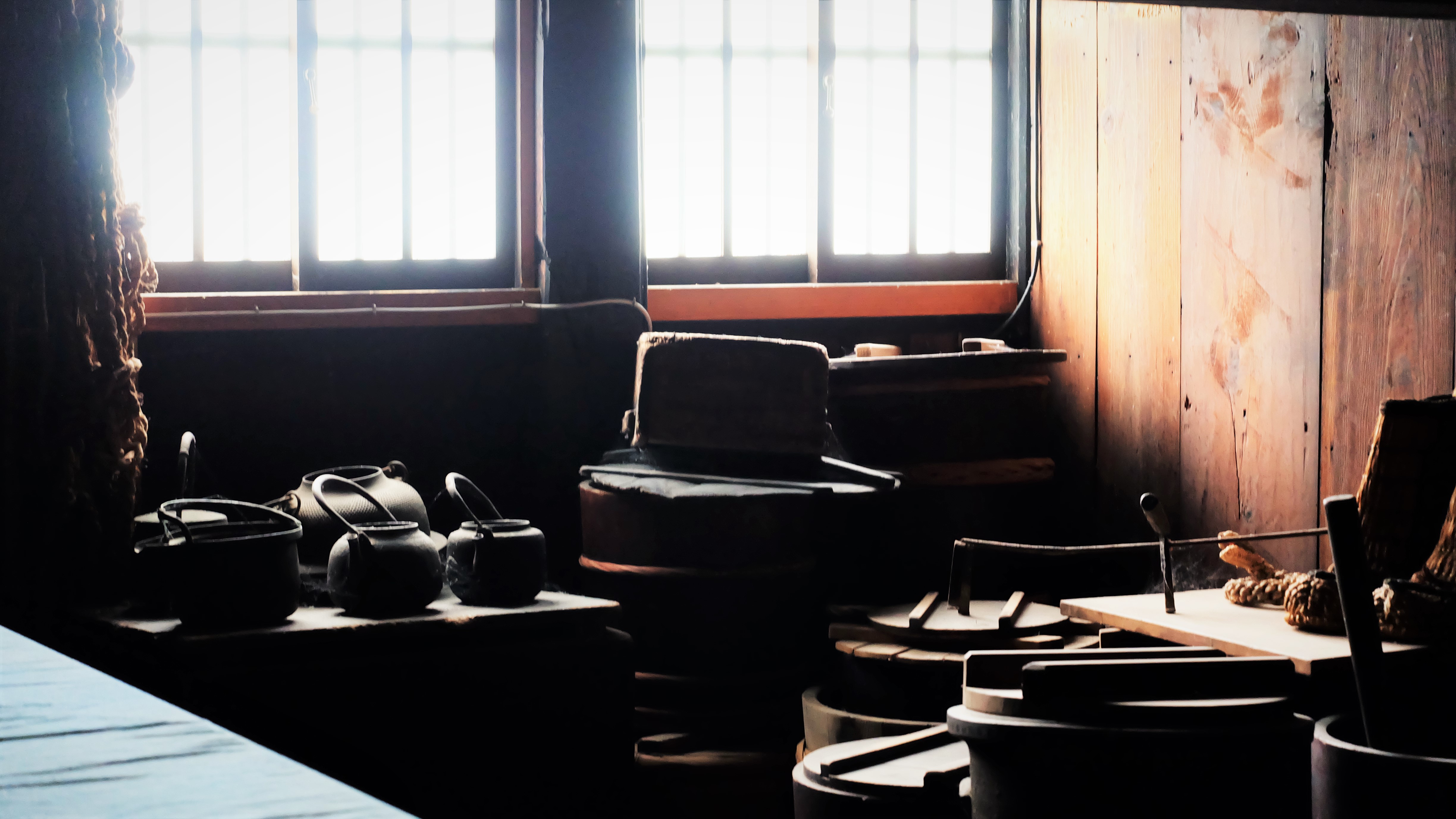 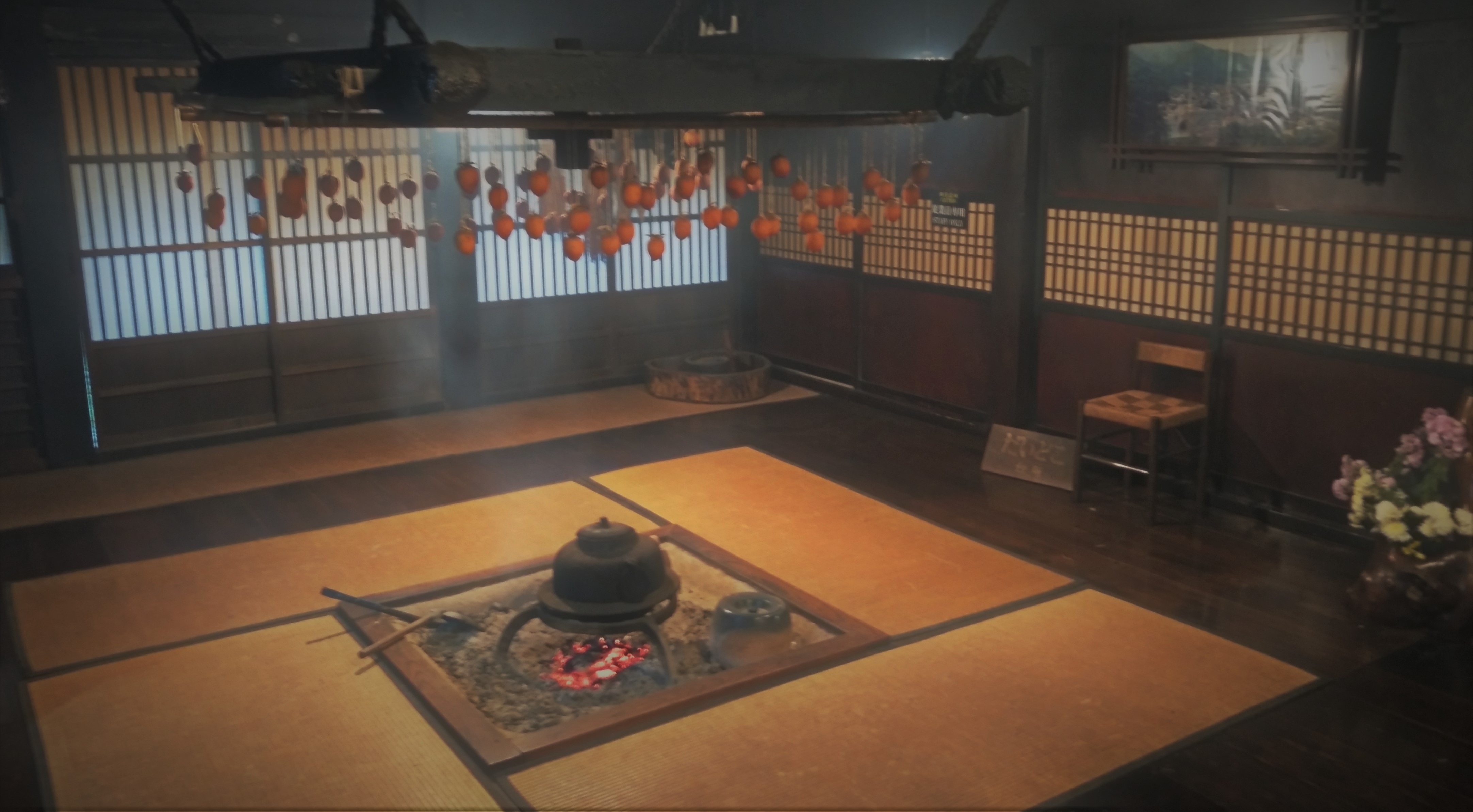 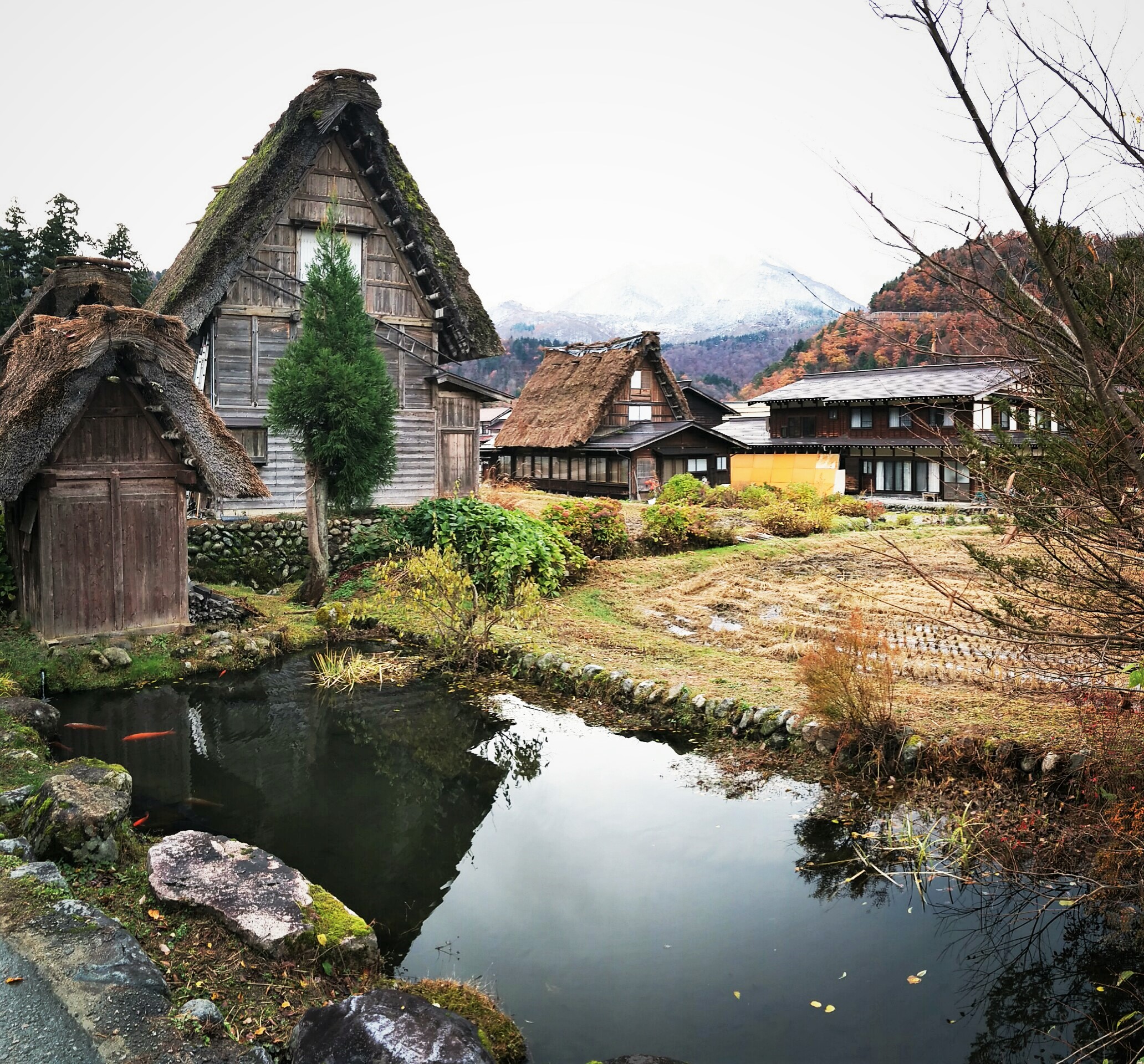 What to visit in Shirakawa-go 白川郷

There is not much else to see, apart from the houses in Shirakawa-go 白川郷. But take the time to let the beauty of the mountains, the peacefulness of the village and the picture-perfect houses slowly sink in.

It is a perfect opportunity to learn about how people used to live in these remote areas in the Middle Ages. At that time, farming was not common, and people used to cultivate silkworms and produce silk. With the decline of that industry in the late 19th and early 20th century, people started moving out and that marked the decline of the gasshō-zukuri villages. So much that only a handful villages remain.

We went in late autumn, and that is when the persimmons were hanging from the trees, providing a further contrast with the green and red autumn colours. Persimmons seem to be an obsession in these areas: people hang them outside their windows or smoke them above the fireplace – both practices that supposedly increase the sweetness by several folds. Those left on the trees are for the monkeys, they said.

We had the fortunate experience of seeing Shirakawa-go in autumn and in winter! The first snow fell the night and the whole village was covered in snow. It was simply stunning!

What to eat in Shirakawa-go 白川郷

Hida Beef 飛騨牛
The surrounding mountains are called the Hida Mountains 飛驒高山. The beef from the black-haired Japanese cattle here is an origin-protected breed, that has been raised in Gifu Prefecture for at least 14 months. Not as famous as the Wagyu beef, Hida-gyu is well-marbled with an intense pattern.

They literally sell this everywhere in Shirakawa-go at exhorbitant prices. I suggest that you not buy it in a restaurant as they will serve this to you in your guesthouse (Ryokan) anyway (see below on suggestions on where to stay).

The Hida Beef with Hoba Miso Set 飛騨牛朴葉味噌定食
This seems to be the signature dish of the region and it’s oh so good. On a table stove called Hida Konro 飛騨こんろ, a dried magnolia leaf called Hoba 朴葉 is used as a base for your grill. Local Shirakawa-go miso paste, thin slices of Hida-gyu beef as well as mushrooms and spring onions are placed on the Hoba leaf. Once the mixture starts sizzling and amazing fats drip from the beef into the sauce. The result is an out of the world gastronomic experience! More on illmakeitmyself.net and justonecookbook.com.

Iwana (whitespotted char) アメマス
This char is literally teaming in the streams you find all over the village, together with koi. It is a freshwater fish that is a local delicacy, which they grill over the central fireplace in the middle of the house.

Wild bamboo shoots and fiddleheads
Both are tender and so flavoursome because they are gathered from the wild. Bamboo shoots are normally boiled and then cooked in stock. Fiddleheads are the young shoots of ferns, that are edible only when they are young. Both are rare examples of Japanese cuisine that you will never eat again outside of Japan.

Where to stay in Shirakawa-go 白川郷

Many will tell you Shirakawa-go 白川郷 is so small it is just worth a daytrip. While that is true, you will only half-experience Shirakawa-go. As the village becomes more and more well-known, you see coaches and tour buses rolling in and it is literally overrun by day-trippers.

The real charm only begins at night! A walk around the village with the only lights from the windows of the houses brings you back a few centuries, and not a sound from people – a harmonious existence of humans and nature.

We stayed over in a gasshō-zukuri house turned into a guesthouse (Minshuku), run by an eighty-year-old grandpa called Mr Wadaya わだや. We didn’t speak a word of Japanese but we felt completely welcomed and cared for.

He first laid the bath for us and we were able to enjoy a hotspring bath after a long day of trekking through the village and surrounding hills.

Dinner was a sumptuous offering of local specialties, including the Hida Beef with Hoba Miso Set 飛騨牛朴葉味噌定食 and grilled Iwana アメマス.

It was freezing cold outside but our tatami beds were so comfortable and warm, we didn’t feel the winter outside and the 2 feet of snow it brought.

Breakfast was a full meal – which we really appreciated, because it really prepared us for the full day of travelling ahead.

To book a Minshuku in Shirakawa-go and experience the hospitality of the villagers and its unique cuisine, you can do so on their website in English.

Our accommodation cost 10.600 yen for two adults in one room, for one night, including hotspring bath, dinner and breakfast. A small price for an experience of a lifetime. 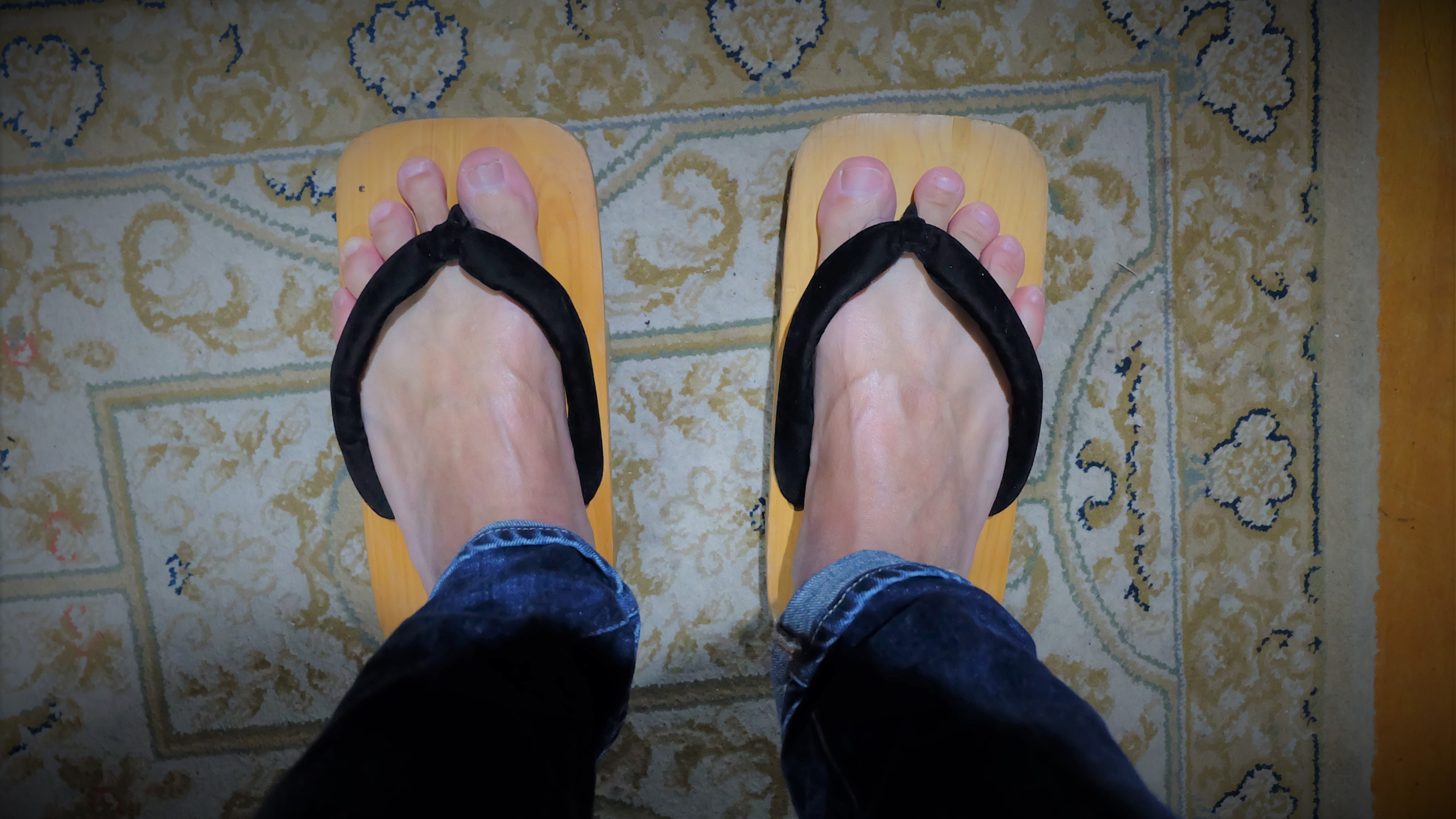 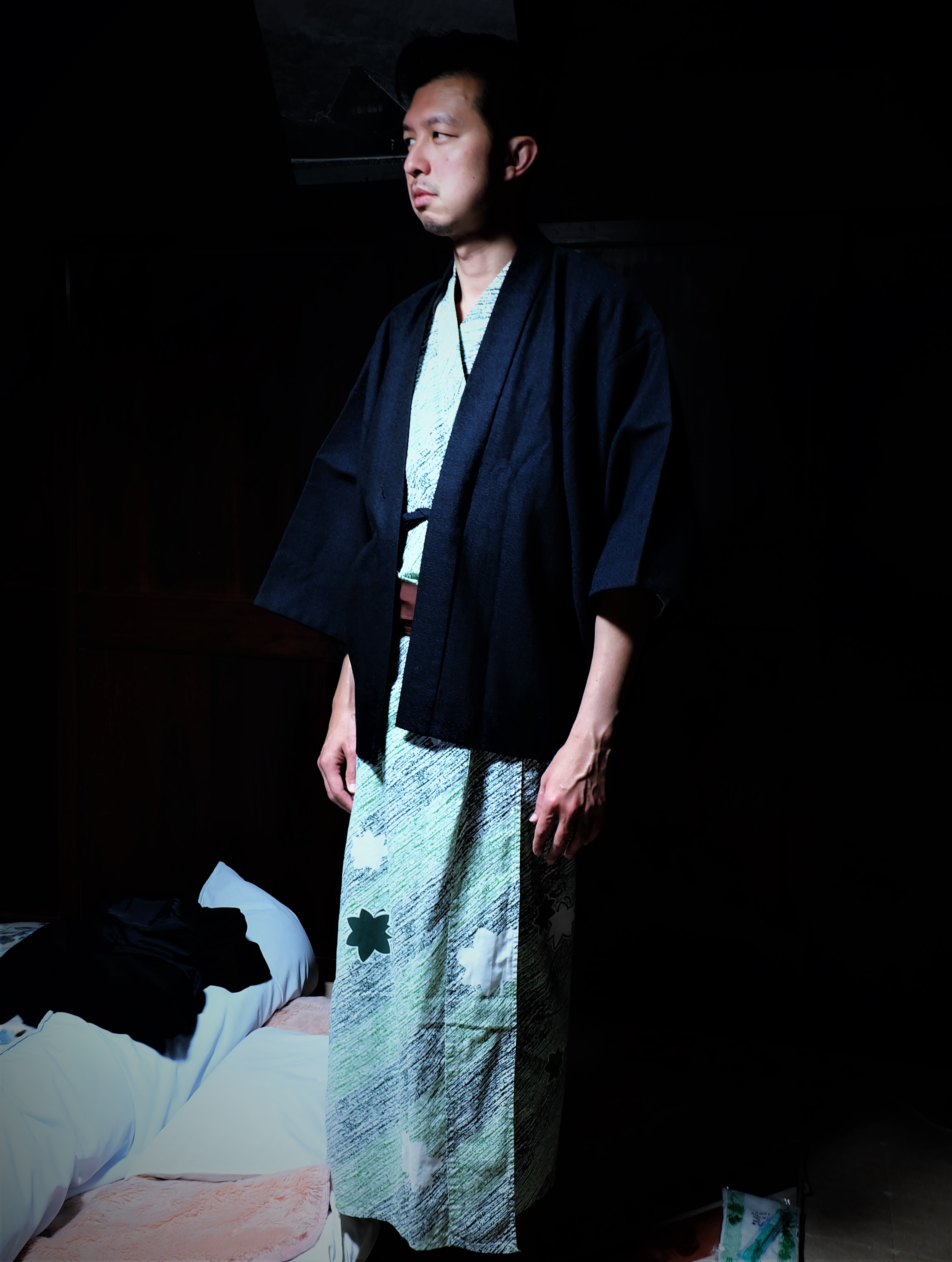 How to get to Shirakawa-go 白川郷

From Kanazawa: We travelled from Kanazawa by private bus – by reservation only. This requires you to book beforehand, because it is a very popular route. You can book your tickets online here. The bus stop is on the East Gate of the Kanazawa train station (where the bus terminal is located). Note that you CANNOT pay for the ticket at the bus-stop or on the bus.

More information on how to get to Shirakawa-go is on the japan-guide.com website.

Why Nikko 日光 is the most magical place in Japan

釜う Kamau: Taste freshly-made Sanuki-udon in the heart of Tokyo

Worth reading »
釜う Kamau: Taste freshly-made Sanuki-udon in the heart of Tokyo

Did anyone notice the solar halo in @leuven ? Agai

Finally, we get to spend my Sunday mornings like h

The last day of sun here in the northwestern part

The sun is back! With the gym still closed, I'm mo

#Throwback to my Japanese onsen experience in Sing