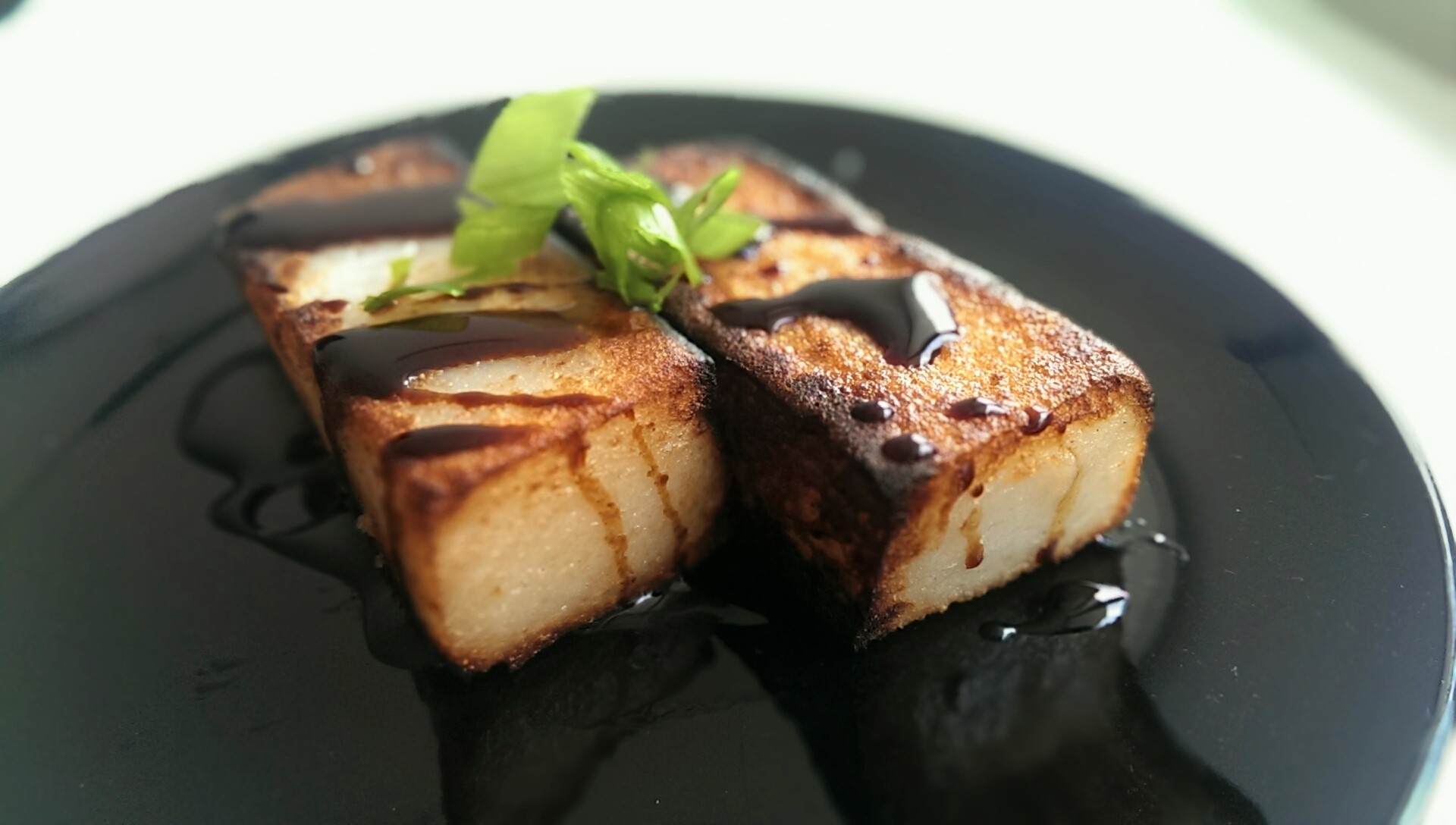 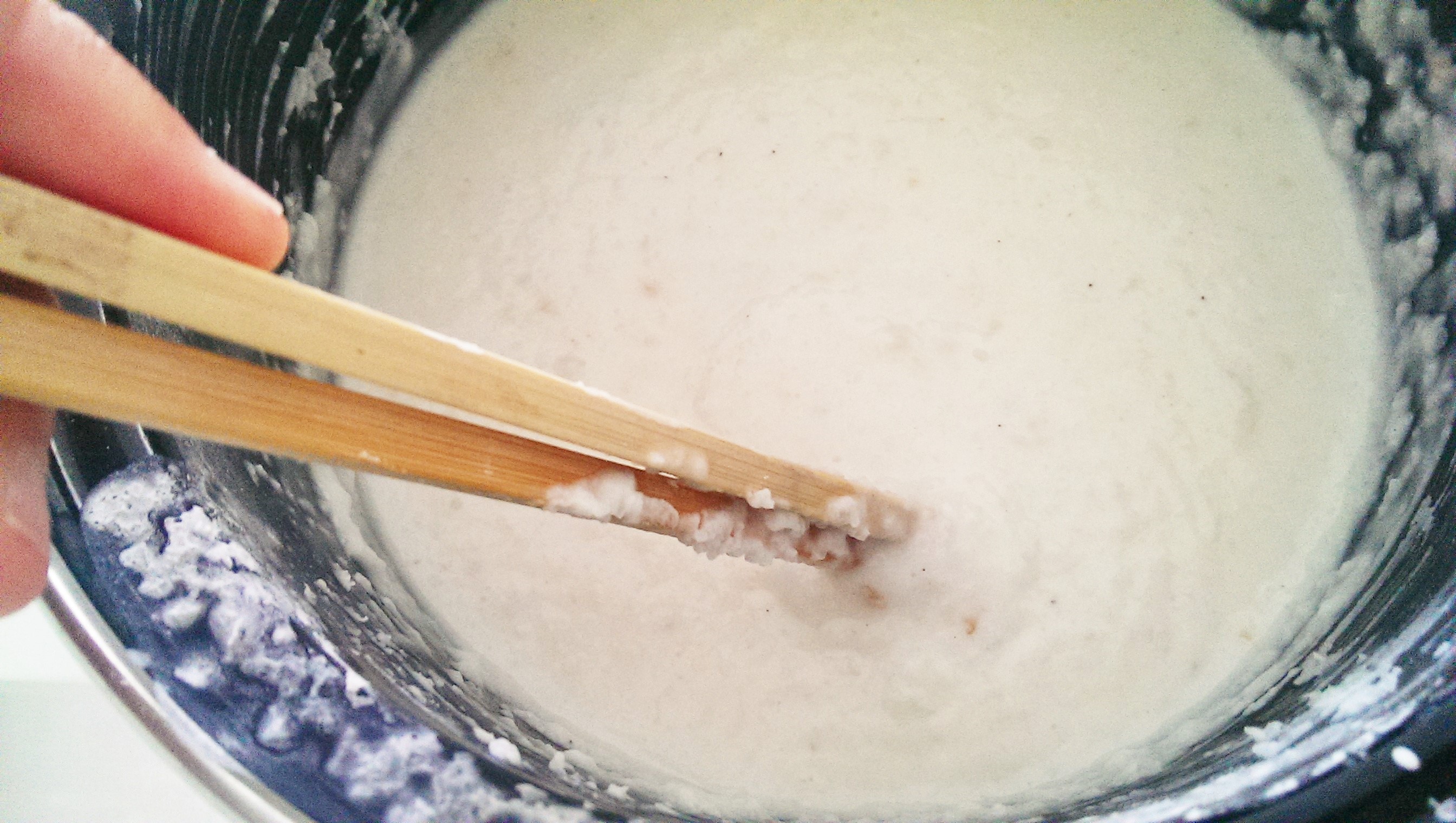 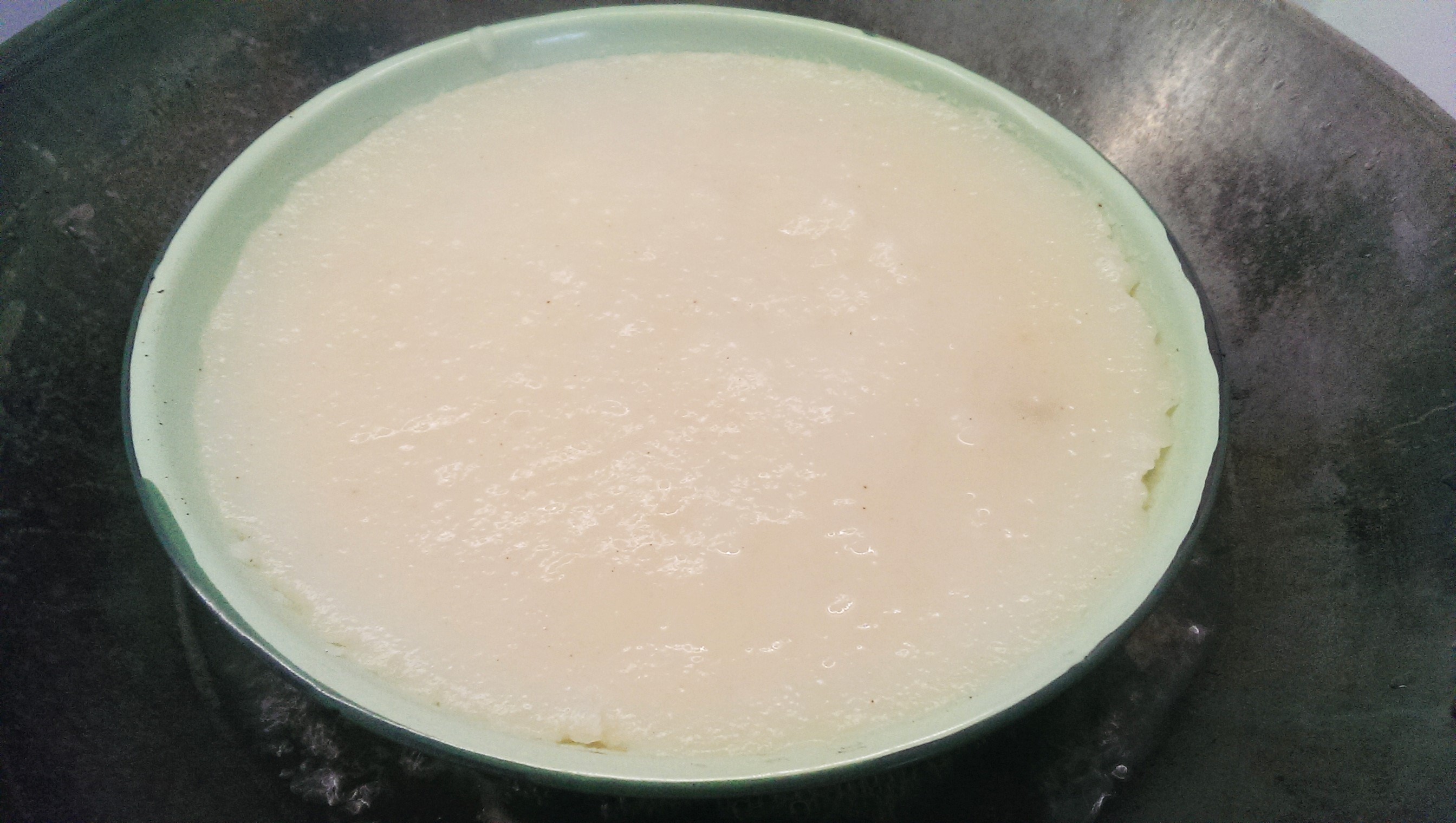 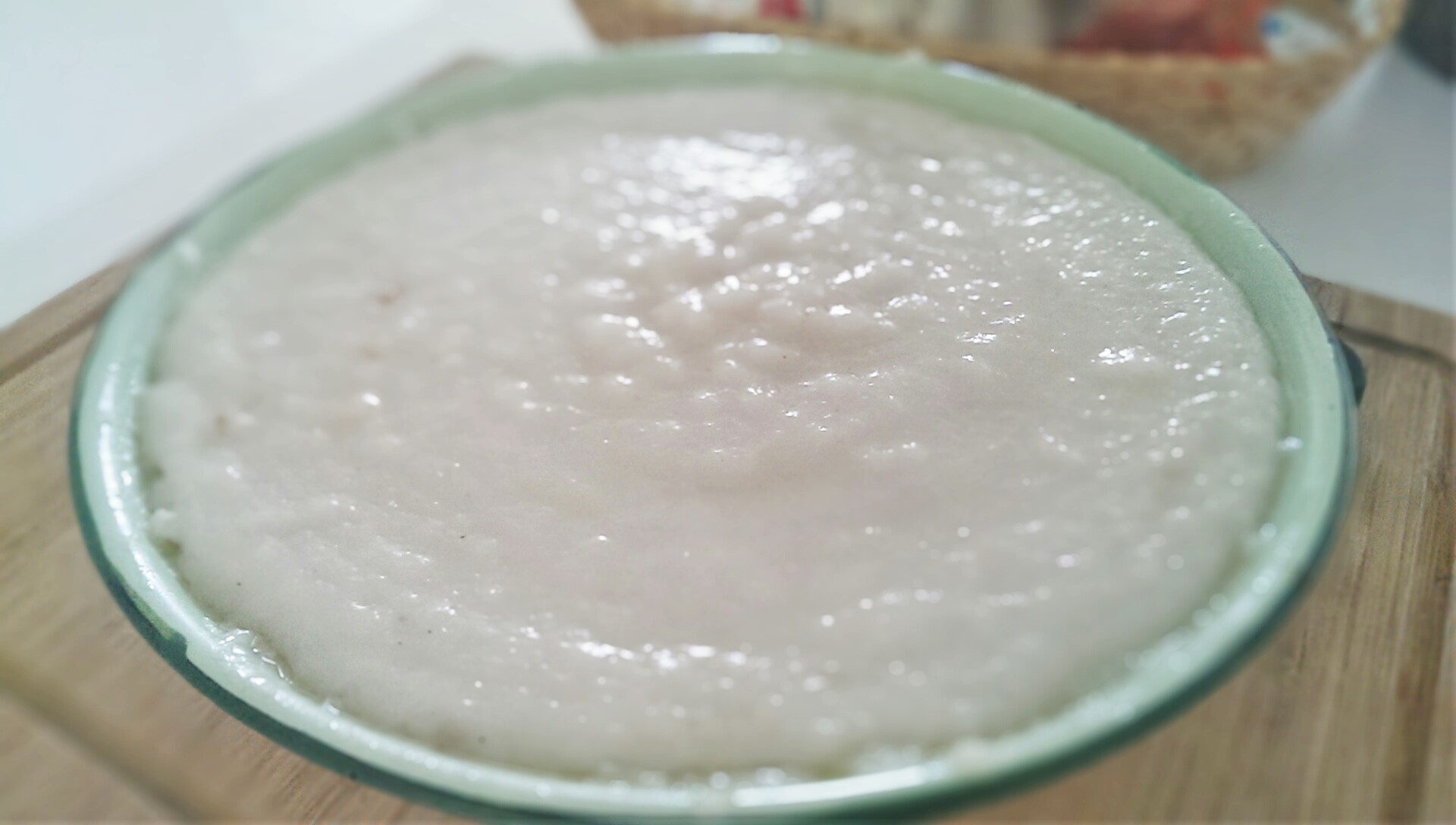 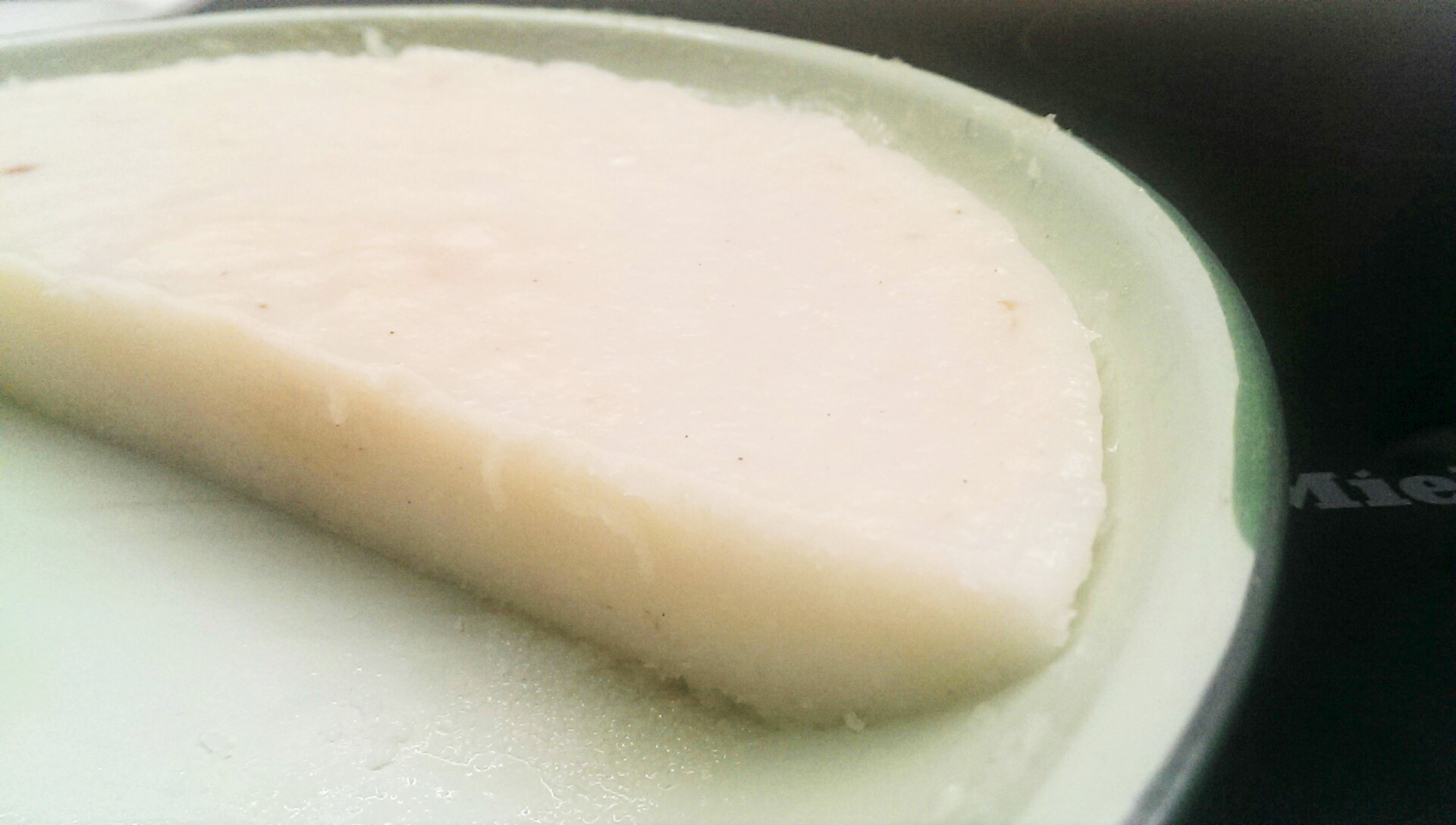 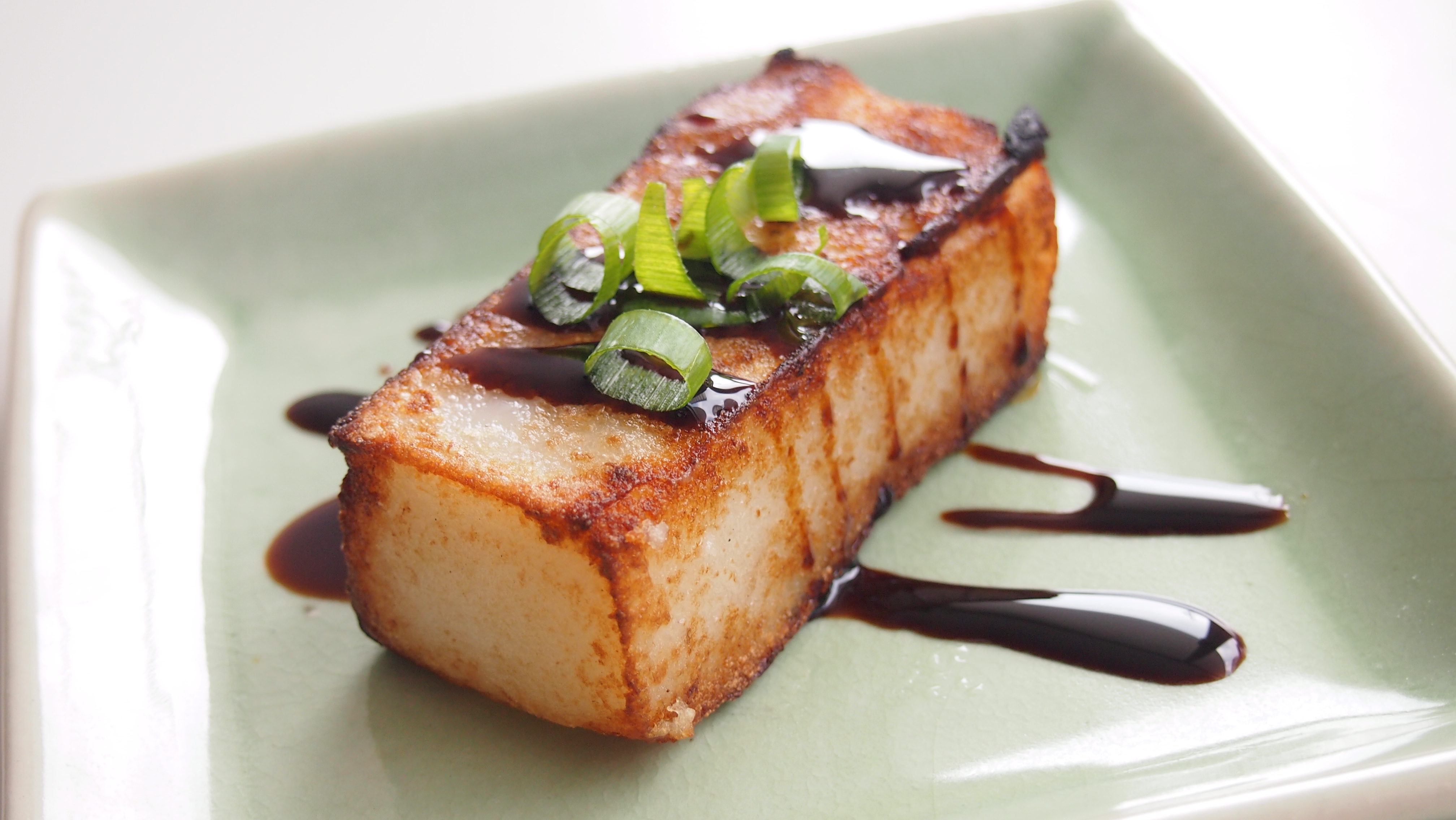 There is a dish that has continually been the favourite of Minnan people for the past millenium, whether or not they have been absorbed into other cultures, and that is ’tsaitaogwey’ 菜頭粿/菜头粿.

Tsaitaogwey is basically a steamed daikon cake. The name ’tsaitaogwey’ is its Hokkien name, meaning ‘daikon 菜頭’ ‘cake 粿’. In Cantonese and Mandarin Chinese, it is called lobakgou and luobogao 萝卜糕, with the same meaning.

In Singapore, due to the bad level of English there, it has earned the horrific misnomer ’carrot cake’ – a direct literal translation from its Cantonese name, as carrots and daikons have the same name in Cantonese. ’Tsaitaogwey’ is also often transliterated as ’chai tow kway’.

Tsaitaogwey is an ancient Minnan dish

Many people claim that tsaitaogwey is a Teochew dish, because of the proliferation of the dish there. Teochew people are a branch of Minnan 闽南 people who have moved to the Canton (‘Guangdong’ 广东) region from their homeland in southern Fujian. The migration probably took place around 580-700AD. The old Hokkien saying ‘潮州福建祖’ – the ancestors of the Teochew are in Fujian – attests to this migration.

However, the fact that this dish is present throughout the whole Hokkien speaking area – in Fujian itself as well as in Taiwan, shows that this is a very ancient Minnan dish that predates that migration. Why is it also eaten in Canton then? Ancient Cantonese did not eat tsaitaogwey. Historians found that the northern population of Canton was in fact naturalised Hokkien migrants. Chaozhou, or ’Teochew’ is a remote pocket of population where the Minnan language survived. By introducing tsaitaoguey into the Cantonese cuisine, it took on Cantonese ingredients, such as Cantonese sausage and bacon. So today, ’lobakgou’ 萝卜糕 as it is known in Cantonese, is tsaitaogwey with bits of bacon and mushrooms – which is never done in its original form.

Making tsaitaogwey was a yearly affair

Contrary to today whether you are in Singapore, Taipei or Chaozhou, tsaitaogwey was not a street food.

Ancient Hokkien people only ate it in winter and made it as a “new year’s cake” 年糕 to celebrate new year’s day.

This is because the Hokkien word for daikon ’tsaitao’ 菜頭 is a homonym for ’auspicious signs’ 彩頭. Eating tsaitaogwey brings one luck and prosperity in the coming year.

Hence a Hokkien saying that still lingers in Fujian and Taiwan that bears witness to its ancient role as a ‘new year cake’: ‘菜頭粿，好彩頭’ – ’tsaitaogwey, good auspicious signs’.

Another reason to believe tsaitaoguey was a new year’s dish is the chief ingredient: the daikon

It doesn’t have a proper English name because only East Asians are familiar with this native root. Throughout China, Korea and Japan, daikon is eaten in winter and considered an important source of vitamins in the cold winter months.

The most useful proverb that you should know and that I live by is: 冬吃萝卜夏吃姜, meaning ’Eat your daikon in winter and your ginger in summer’

This folk wisdom is proven by the most famous Chinese physician of all times Li Shizhen 李时珍 (1518 – 1593). In his ‘Compendium of Materia Medica’ 本草纲目, he wrote about the synergy between daikon and ginger:

圃人种莱菔，六月下种，秋采苗，冬掘根
’The gardener plants the “laifu” 莱菔 (ancient name for daikon): he sows in summer, they sprout in autumn, and he harvests the roots in winter’

多食莱菔动气，惟生姜能制其毒
’Consume more daikon to move the chi. Only raw ginger can purge the toxins.’

What Li Shizhen meant was: consume the daikon throughout winter to prevent the toxins from taking root in your body, when summer comes, consume ginger to purge them all out.

In this sense, tsaitaogwey is truly a dish that brings forth rebirth! It is not only a celebratory dish that welcomes the new year, it signifies renewal for your digestive system!

Now that you know about the Minnan origin of tsaitaogwey, its beginnings as a new year’s dish and its health benefits, onwards to the recipe!!

With your newly prepared tsaitaogwey, you can make a whole lot of different dishes out of them!

Tip: Wrap your unused tsaitaogwey in plastic wrap to make sure they do not dry up and place them in the fridge. Use them up within 3 days.
I advise against storing them in the freezer and the texture will change.

I am Harry Daenens. Carry It Like Harry is a blog about the little inspirations I find in life that add moments of joy and satisfaction. For me, that’s happiness.

Yutsagwey 油炸粿: How the Chinese made a snack out of Macbeth and his Lady

Thanks for the luxurious suite, @crowneplazavte! W

After exploring the city of #Vientiane, time for a

Had a good night's sleep at @crowneplazavte. Now o