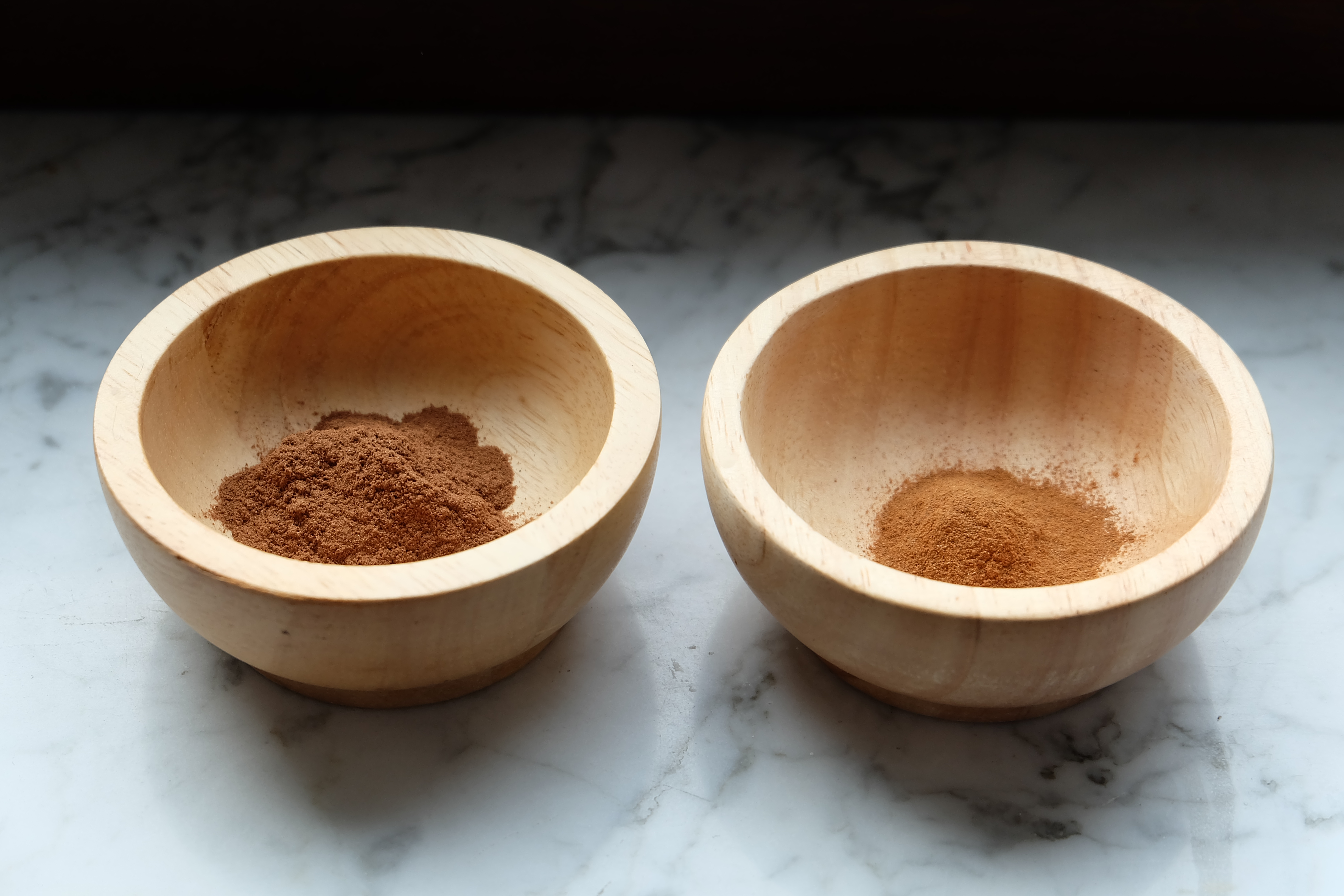 I have recently discovered what the internet has claimed to be the “true cinnamon”. The hype worried me a bit, especially when the claims about the benefits of “true cinnamon” are often exaggerated and mixed with a considerable amount of racism.

So I decided to embark on some research.

The Different Types of Cinnamon

There are not only two types of cinnamon. In fact, there are many. They all belong to the genus Cinnamomum.
The cinnamon tree is native to tropical Southeast and South Asia, and the spice we call cinnamon, comes from the peeled, dried and rolled bark of these trees.

The English name cinnamon comes from Old French ‘Cinnamome’, which in turn comes from Latin ‘Cinnamon‘. The Latin name came from Greek κιννάμωμον kinnámōmon, which was borrowed from Phoenician and Hebrew קינמון (qinamon), which through Arab traders to Southeast Asia borrowed from Malay.

Cinnamon is one of the oldest used spices in human history. As early as 2000 BC, cinnamon was imported into ancient Egypt for use in embalming mummies. It was also highly prized in Ancient Greece: according to Herodotus, the spice grew in Arabia and were guarded by winged serpents.

But the origin of cinnamon – worth its weight more than gold – remained a mystery to Europeans until the Portuguese embarked on their maritime conquest in the 15th century.

This species of cinnamon originates in sub-tropical China. It is now grown in the province of Guangxi which is the world’s second largest producer of ‘cinnamon’, after Indonesia.

The internet injects anti-Chinese sentiments into the war between fake and real cinnamon by calling this ‘fake cinnamon’ while cassia actually has an equally long history.

The English name ‘cassia‘ comes from Latin ‘cassia‘, which came from Ancient Greek κάσια (kásia), which came from Hebrew קציעה‎ (QeTsi`aH). This is because in ancient times, ‘cinnamon‘ and ‘cassia‘ were thought of different spices as the ancient Europeans did not know these actually came from the same types of tree.

Cassia is also known as ‘Cinnamomum aromaticum‘, because it has more aromatic than the Ceylon cinnamon.
Unbeknown to Europeans, cassia and cinnamon have always been the same spice family to Southeast, East and South Asians, and we have never made a judgement on which is ‘real’ or ‘fake’.

No one quite knows how the Cinnamomum cassia made its way to Europe and got considered to be a separate spice from the cinnamon.

It is likely that it took the northern route from Western China through Central Asia, while cinnamon was exported from Indonesia through India by Arab sailors to Egypt and Greece.

In South China, where cassia has traditionally been used, cassia is considered a medical ingredient rather than a spice. In the “Compendium of Materia Medica” 本草綱目 compiled by Li Shizhen 李時珍 in 1578, cassia has the following entry:

Cassia has long been known to the Chinese as a powerful anti-coagulant, which helps to lower blood pressure and fight inflammation, thus reducing the chances of stroke. Yet they wrongly advised about the long-term consumption of cassia (and of all cinnamons) which leads to liver damage.

Exactly in the year 1518, the Portuguese anchored at the Kingdom of Kotto in present-day Sri Lanka. Much to their delight, they have found the birthplace of cinnamon (not cassia). Greed soon led to cruelty, so the Portuguese enslaved the people of Kotto and gained control of the cinnamon trade. In 1638, the nearby Kingdom of Kandy collaborated with the Dutch, and got rid of the Portuguese in Ceylon. However the whole of Ceylon laid in the hands of the conniving Dutch for the next 150 years. The British rivalled the Dutch in power grabbing around the world and they fought each other on all continents with the British winning the Fourth Anglo-Dutch War which led to Ceylon changing hands in 1784.

By this time, cinnamon was no longer worth more than gold, as other species of cinnamon were discovered.
Thus the Cinnamomum zeylanicum became once again a local product, until the recent ‘discovery‘ by millennial foodies in the English-speaking West who call it ‘the true cinnamon‘ out of pure ignorance.

This species of cinnamon found in the Philippines is closely related to the Cinnamomum zeylanicum.
While the Portuguese were stripping bark off cinnamon trees in Sri Lanka, the Spaniard Ferdinand Magellan found the Cinnamomum mindanaense in Mindanao and started exporting a rival ‘cinnamon‘ to outsell the Portuguese.

This species of cinnamon is native to the Quảng Ngai Province of central Vietnam. Its taste and aroma is close to cassia and is even more pronounced: this is the strongest of all cinnamons and contains the highest level of cinnamaldehyde (25%) and the toxic coumarin (6.97 g/kg).

Saigon cinnamon is an indispensable ingredient in the broth for the Vietnamese noodle soup ‘phở’.

Spread throughout South and East India, Nepal, Burma and Southwest China, this species of cinnamon is used traditionally in these countries’ diverse cuisines.

The leaves can be used as well as the bark. For the Chinese, cassia is used as a medicine, while the Cinnamomum tamala is for cooking as it is much milder and less present. In Kerala in India, this is an indispensable ingredient in the kumbilappam dumplings and is used in the tsheringma herbal tea in Bhutan and Nepal.

This is the ‘original’ cinnamon. Used for thousands of years by the inhabitants of the Malay Archipelago, the ‘kayu manis‘ or ‘sweet wood’ lends its name to the present-day appellation of the genus ‘cinnamon’.

The Chinese sees this as a useful replacement for the Cinnamomum tamala in the kitchen and considers this spice more fragrant, hence the name “shadow fragrance”.

So in the end, the cinnamon you have in your kitchen cabinet – most likely to be the Cinnamomum burmannii – is already the original and true cinnamon. All that talk about the Ceylon cinnamon being the only true cinnamon is pure and utter bullshit.

What are laksa leaves?

Meet Black Goji Berries 黑枸杞: The Most Powerful Anti-Oxidant in the World

Imagine staying in a 16th century refuge house of

🆕 REVIEW of @amazfit.global X is now up on my s

When all the doors look like they are closed to yo

Look up. The sun is always there, behind the cloud

Yes, things are tough. Sometimes we think it's the