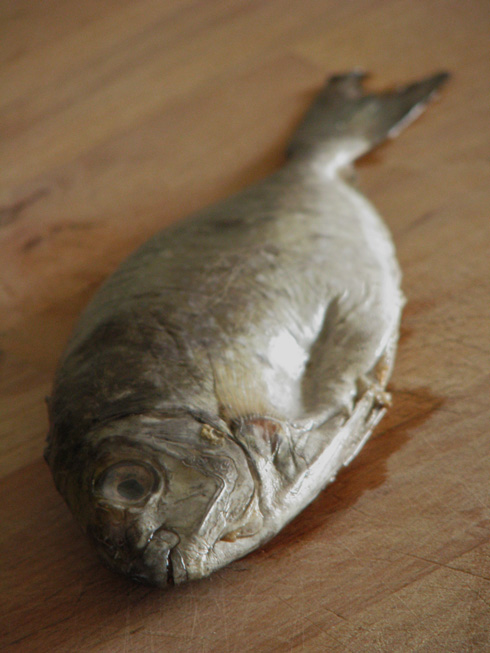 The white-spotted rabbitfish is found from the West Pacific to the Eastern shores of the Indian ocean. It measures about 15-20cm long and are eaten regularly by all peoples living along the shorelines of these seas, hence the huge list of its different names in all sorts of languages.

The white-spotted rabbitfish is particularly well-liked by the Teochew, a community of Minnan people living in the southeastern Chinese province of Guangdong (Canton). Teochew cuisine is extremely light, it uses very little salt or condiments, preferring to bring out the ingredients’ taste through its freshness. This fish is hence usually steamed in Teochew cuisine.

The fish is definitely an acquired taste. Its stomach region is extremely bitter and its “fishy stench” can be overpowering, especially when the fish is very fresh.

Around springtime, the rabbitfish contains a lot of roe. Seeing this as an omen of abundance, Teochews like to celebrate the lunar new year by eating rabbitfish.

In modern times, this however has led to overfishing in the South China sea and around Hong Kong, where the fish used to thrive. Stocks around the Malay Archipelago and the Indian Ocean are also threatened.

If you like to consume the white-spotted rabbitfish, do not eat those from mismanaged fisheries in China and also allow the fish to spawn by eating them after springtime.